7 Business Analyst Lessons From The Godfather

Written by Bruce Harpham on August 18, 2014. Posted in Articles. 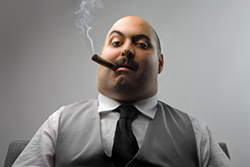 Business analysts have plenty to learn from “The Godfather.” Whether you’re the head of the Corleone crime family or leading an IT project, analysts and mobsters have a lot in common. Don Vito Corleone may not have used Excel and Microsoft Project, but he knew a lot about delivering projects and getting results.

Read on to learn important career lessons from The Godfather. I will be sharing key points of the story, so stop right now if you are concerned about spoilers from the movie!

1 – Why You Need To Build Your Reputation For Results

When you first think about the mafia and organized crime, you probably think about violence. Certainly, violence is part of the mafia toolbox. Interestingly, violence was not the ONLY tool that the Godfather employed.

As The Godfather went through his career, he built up a reputation for results. Whether it meant helping out the local grocer or a tenant, the Godfather delivered. His reputation gradually grew to the point where violence was rarely needed.

Persuasion and diplomatic tactics were enough for him to reach his goals.

Lesson: What is your reputation at the office? Do you have a reputation as a complainer or someone who delivers results? It’s a difficult question that needs to be answered.

If you’re unhappy with your reputation, don’t panic. You simply need some focused advice to improve. You need a trusted advisor for perspective.

Everyone in the family respects the Godfather for his long experience. You could say that he is the subject matter expert in many aspects of the family business. Yet, he also knows that there are gaps in his knowledge. Running a mafia business entails confrontations with the criminal justice system. So, the Godfather wisely sought a dedicated lawyer.

Tom Hagen, lawyer and consigliere to the Corleone family, advises the Godfather on a range of matters. I also find it interesting that Tom is one of the few non-Corleones admitted into the inner circle. His trusted advisor status combines expertise with the detachment of being a non-family member. Business analysts can learn from Tom and the Godfather’s relationship. They are close enough that Tom can share difficult truths without few of reprisal.

Lesson: To grow your business analyst career, find a trusted advisor outside your organization who can give you an unbiased second opinion on challenges you face. It could be someone in a different firm or perhaps a friend from college who went to law school.

Communication is one of the most important skills that business analysts possess. Understanding technology deeply and the practical objectives of the business require empathy and careful consideration. Bluntly denying a user’s request for new features may be the right move, but it matters how you communicate that fact.

Surprisingly, the mafia world also requires subtle communication skills. The careful viewer of The Godfather will observe that bullets are rarely the first means of making a point.

Early in the film, the Don has to make a point to a movie director. He starts by sending his advisor, Tom Hagen, to make a subtle request. Unfortunately, that initial attempt at persuasion is unsuccessful. The Godfather has to turn to radical methods in order to make his point. Knowing when to escalate a situation into a confrontation is a delicate art that the Don mastered in his long career.

Lesson: When you face a conflict, consider your communication strategy. Start with smaller gestures – such as a short phone call to a colleague before you consider escalating a problem to senior management.

4 – Have A Succession Plan

In the life of a business analyst, people come and go. The Corleone family is no different. When the Godfather dies, his son Sonny takes over the family in a moment of crisis. This situation is a textbook case of succession planning gone awry.

In my view, Sonny is not ready to transition to leading the family.

Nominating the eldest son to lead the organization is the succession principle used by the Corleones. In the corporate world, the analogous situation would be automatically promoting the most experienced employee to management in the event of manager departure. This approach has the virtue of simplicity. Unfortunately, promotion based on years of experience doesn’t consider individual skill or leadership ability.

Lesson: when you are involved in long term projects – anything over a year – succession planning cannot be ignored. Don’t be afraid to bring up the topic, even if you are not formally assigned to a management role.

Taking on new tasks and responsibilities can be dangerous. In an effort to impress management, you can offer to automate a process only to realize later that doing so requires programming knowledge you don’t have. Ultimately, you need to focus on your strengths to succeed as a business analyst.

Don Corleone faced a similar challenge in deciding whether or not to expand his empire to include illegal drugs. Despite the profit opportunities offered, the Don refused to enter the business. In the eyes of some, this made him a traditionalist who was behind the times. In his world, I would argue that the Don made the right decision – expansion into the narcotics trade would attract too much unwanted attention from the authorities.

Lesson: When you encounter an activity that requires new skills, think carefully about deciding whether it makes sense to learn it. Repairing your weaknesses rarely pays off compared to investing energy in your strengths.

6 – Understand The Challenge of Change Management

Many business analysts work on projects that include a change management component. This kind of change includes training stuff on a new process, introducing new habits and altering reporting relationships. Even long overdue change and improvement can make stakeholders feel uncomfortable. Without the right preparation and approach, poor change management will doom a project.

In the Godfather film, Michael initially looks at ways to move away from his family. Early in the story, he is proud of his accomplishments in the military which sets him apart from his siblings. Ultimately, Michael’s efforts to escape from his family’s traditions are unsuccessful. He ends up running the crime family’s operations rather than reforming them.

Lesson: Sometimes, you will fail at change management. Be prepared for that eventuality.

7 – Give Favors To Build Relationships

When was the last time you gave a favour to someone? It could have been a small gesture – getting coffee for a colleague or teaching a technical skill to a new hire. Giving (and, occasionally, asking for) favors is a key aspect of building relationships. For the best results, set yourself a goal to make give favors to your colleagues a few times a month.

My favourite example of the Godfather giving someone a favor is one of the least well known. At one point, an elderly woman is having difficulties with her landlord. The Godfather steps in and helps her out. In this case, it is unlikely that the woman will be able to help the Don.

Lesson: Sometimes, you give a favor simply to make the world a better place.

Now you’ve learned about the Godfather’s techniques, it is time to put them into action. This week, choose one of the lessons from this article and put it into practice.