Are Business Analysts In Danger of Becoming Extinct? Part 1 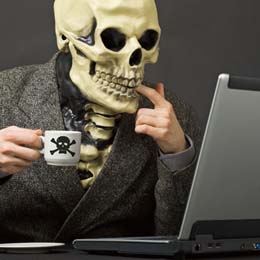 Most organizations have an understanding of the value of business analysis and what requirements mean to a project.  At the same time, conditions are emerging that have the potential to undermine the position of the business analyst to the point of extinction.  In this first part of a two-part article, we’ll take a closer look at what has brought these circumstances about in order to provide a clear understanding of why BAs need to balance their technical and business skills and demonstrate proof of their value to the organization.

Some historical perspective on the evolution of information technology draws interesting parallels to the story of David and Goliath.  IT essentially began with the Goliath that was the big old, clunky IBM 3480 mainframe.  The David to IBM’s mainframe came along as the new Windows operating system and networks. David won the day and the mainframe went the way of the dinosaur.  New opportunities continued to expand the world of technology with network computer systems and the major emergence of the Internet. With that, the Internet, desktop computers and local area networks became the new Goliath.  The new David was the software developer who was desperately trying to crank out products that could work on networks and the Internet.   As Goliath’s world of technology grew out of control, yet another David in the form of the project manager was introduced in order to gain control over the world of software development.

Up until that point in time, success was measured with clarity and precision.  To the technology world and software developers, to measure meant answering the questions, “Is it working well and are the lines of code being executed?”  So the project manager was brought in to gain control over what wasn’t working. The result was a clearer definition of success in terms of time, budget and quality.  However, Goliath continued to rage on in the software development vs. project management battle, as failure reports from the Standish Group and other research bears out.

The project manager began to partner with the business analyst. David now took on the dual roles of the project manager/business analyst and he understood the secret weapon to defeating Goliath was requirements.  Prior to that partnership, the PM was responsible for what could be called requirements activities.  When the additional role of the BA was introduced, there were two disciplines aiming to subdue the mighty Goliath.

During the time before the BA was introduced, measurements of success and progress were relatively easy.  The introduction of the complementary BA role was as a strong communicator and facilitator, acting as the catalyst to project success.  The overarching problem is that BAs are now selling themselves short in promoting their business skills when they should actually be promoting a balanced portfolio of technical and business skills.  While facilitation and communication are critical, they are difficult to quantify. As a result, BAs risk extinction because by putting all their eggs in the business skills basket, they aren’t exercising their technical skills that demonstrate quantifiable impact.

BAs need to understand their audience when it comes to balancing business skills and technical ones.  The people who grew up in technology—project managers, software developers—are now our leaders—the CIOs and managers of IT teams who are accustomed to black-and-white quantification.  So in order for BAs to adequately sell the value and impact of their contributions, they need to speak the language of their audience, which can only be done through a balanced portfolio of competencies.  For example, as a practitioner of enterprise analysis activities, the BA can identify inefficiencies in the organization and provide direction on how to improve them.  These are activities from which impact can be clearly proven.

Most critical to practicing a balance of competencies is understanding the BA’s business value and impact.  As an example, about 10 years ago, one of the top five banks in found that its insurance division wasn’t generating nearly the amount of revenue that had been anticipated.  The bank was very progressive in its view of the realm of requirements and business analysis.  It had actually coined the term “SWOT team” for their BAs due to their ability to identify strengths, weaknesses, opportunities and threats. The bank sent in the SWOT team to evaluate all business issues related to its auto insurance business.

The SWOT team discovered that in order to give a prospect a quote over the phone for auto insurance, it took an average of 17-20 minutes (a quantifiable metric). With further investigation, they began to clearly understand that there were multiple systems with which the call center reps had to deal that slowed them down and prevented them from handling more customers.

The SWOT team proposed a service-oriented architecture-type system that pulled together all systems and provided access to information through a common interface that put everything on one platform.  This enabled the call center reps to dramatically reduce the time it took to provide a quote.  The resulting increase in revenue was estimated at a cool C$1 million a day.

This example should resonate loudly with BAs.  The SWOT team didn’t go in with just their communication skills drawn; they

They accomplished all of this, in addition to making C$1 million more a day.

They did it through enterprise analysis, requirements analysis, creating models, facilitation, solutions assessment and validation: in other words, a very broad portfolio of competencies.

In Part 2 of “Are Business Analysts in Danger of Becoming Extinct?” we’ll examine the balance of competencies needed along the BA’s career spectrum

Glenn R. Brûlé, CBAP, CSM, Executive Director of Global Client Solutions, ESI International, brings more than two decades of focused business analysis experience to every ESI client engagement. As one of ESI’s subject matter experts, Glenn works directly with clients to build and mature their business analysis capabilities by drawing from the broad range of learning resources ESI offers. A recognized expert in the creation and maturity of BA Centers of Excellence, Glenn has helped clients in the energy, financial services, manufacturing, pharmaceutical, insurance and automotive industries, as well as government agencies across the world.