Being “Authentic” Doesn’t Give One License To Be An Ass 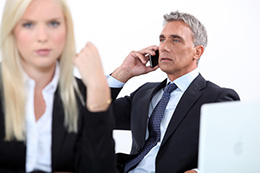 Disclaimer: Please note the following article contains strong language that some may find offensive but the message is one I feel is far too important to not relay. The following article was published in Chief Executive taking on the leadership lessons of Steve Jobs.

Meg Whitman lives by it. Hilary Rodham swears by it. Steve Jobs ruled by it.
These days everyone is touting their authenticity. What I call “Popeye’s ‘I yam what I yam'” school of self-management is in full swing. Far too often, however, this cry of authenticity has become nothing but an excuse for bad behavior. In short, it’s giving people—particularly those who think they’re geniuses— license to act like assholes.

In a recent Harvard Business Review cover story, Walter Issacson appeared to rationalize and legitimize this type of behavior in his essay on the true leadership lessons of Steve Jobs—
the poster boy for the movement. Last year Issacson wrote a bestselling biography on Jobs. His purpose in writing the article now? To set commentators straight “who fixate too much on the rough edges of Job’s personality (especially those with no experience in entrepreneurship).”
According to Issacson, Jobs’s behavior can be explained away thusly:

“Jobs was famously impatient, petulant, and tough with the people around him. But his treatment of people, though not laudable, emanated from his passion for perfection and desire to work with only the best.”

And by Jobs himself, who, when pressed by Issacson on whether he could have gotten the same results while being nicer, replied:

“Perhaps so. But it’s not who I am. Maybe there’s a better way—a gentlemen’s club where we all wear ties and speak in this Brahmin language and velvet code words—but I don’t know that way, because I am middle-class from California.”

Now that’s what we used to call back in the 70s a “cop out!” Did Jobs really think we’d buy into the notion that you’re either someone who is telling it like it is with brute force and honesty, civility be damned, or you’re a stiff, tight jawed, mealy-mouthed leader who is unwilling and unable to tell the truth? How ridiculous. Is there no middle ground for a leader who respects those around him and provides both positive as well as critical feedback in a thoughtful, direct, manner?

As well, did he really have the audacity to pin his bad boy behavior on his middle class Californian roots? While I wasn’t raised in California, having lived here now for over 25 years, I know of a lot of successful business leaders who spent their formative years in this state, in the very same middle class as Mr. Jobs and his family, who haven’t resorted to the kind of behavior that Jobs was famous for. Indeed there are numerous examples of leaders everywhere—Howard Schultz of Starbucks, Ursula Burns of Xerox, and Daniel Vasella of Novartis, who were exposed to poverty and sometimes abuse as children and emerged as compassionate and respectful leaders.

Many of us—myself included—love the story of how Jobs re-built Apple by cutting through the BS, winnowing projects down and getting rid of people who did not share his vision. No doubt that incisiveness and directness are behaviors to be valued and developed. But was it really necessary to take those behaviors to the extent he did, exposing a shameful level of scorn, rudeness and even cruelty to colleagues and fellow workers? In others words, could he still have succeeded without being such a jerk?

Absolutely he could have. Jobs got away with it because he could. Yes, the guy who told us to “Think Different” , who strived for perfectionism, scrutinizing his products along with everyone around him, never really turned the lens inward on himself because he didn’t have to. While I never met the man, it’s clear from the hundreds of people that Issacson interviewed that his genius was so revered that many people just wanted to be near him, no matter how difficult or demeaning the interaction. In fact, after one such episode where Jobs said to an employee, “You asshole, you never do anything right!” the response was “Yes, he was an asshole but I consider myself the absolute luckiest person in the world to have worked with him.”

It’s curious why we need studies to tell us what many of us know instinctively: people respond better and are more successful in environments where people are civil and respectful to one another. For those who miss the point, though, thankfully there are hundreds of social scientists who remain gainfully employed ready with reams of research results that demonstrate how an uncivil culture deleteriously affects the bottom line through loss of motivation, collaboration and high turnover. Furthermore, no corollary has been found between creative, productive employees and workplace abuse.

After years working on the front lines coaching professionals in some of America’s toughest, most demanding industries, no one will ever convince me that being a bully is excusable due to someone’s ingenuity, title, longevity, company size or success. The simple truth is that, like our playgrounds, bullies have no place in corporate America. If your definition of being authentic involves being cruel, disrespectful, amoral or running roughshod over people, then I’d say that there are a lot of words to describe your personality but authentic isn’t one of them.