Written by Willem Van Galen on November 19, 2013. Posted in Articles.

This second part of the article concludes the user goal vs. use case goal patterns and compares and contrasts an additional pair of use case model elements introduced along the way.

The patterns in this section show that the goal of a user interacting with a system isn’t necessarily equal to the goal of the use case the user initiates towards that end. Moreover, a use case that is directly or indirectly related to the initiated use case may represent a goal of someone other than the user (i.e., an off-stage stakeholder).

Pattern 3: User’s Goal = Use Case Goal (With Deviation Extension Use Case Side Goal)

In this pattern, the initiated use case pursues the user’s goal, but is interrupted for a moment by an extension use case that pursues an off-stage stakeholder’s side goal.

Regarding the following diagram, which is based on Ivar Jacobson’s example in [2]:

In other words, a call can be counted, but this behavior is non-essential to completing the Call Handling use case. 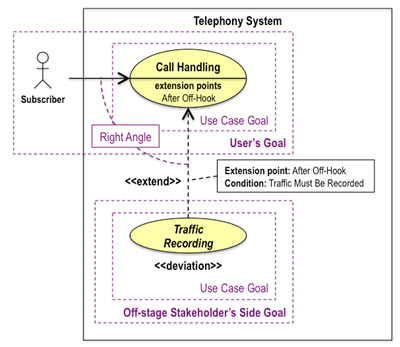 Key observations about this pattern are provided after pattern 4.

This is the pattern where the initiated use case pursues part of a larger user goal and, unbeknownst to itself, is augmented by an extension use case that represents another part of that larger user goal.

Regarding the following diagram (i):

In other words, the user can choose to verify the employee id, but this behavior is non-essential to completing the Bonus Employee use case. 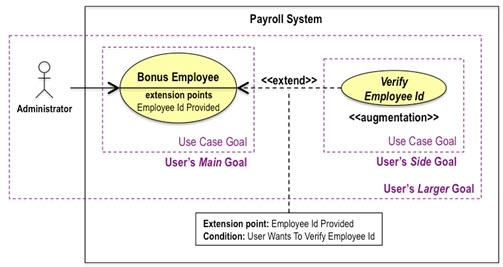 The following observations about patterns 3 and 4 apply in the end to the extension use case construct in general. 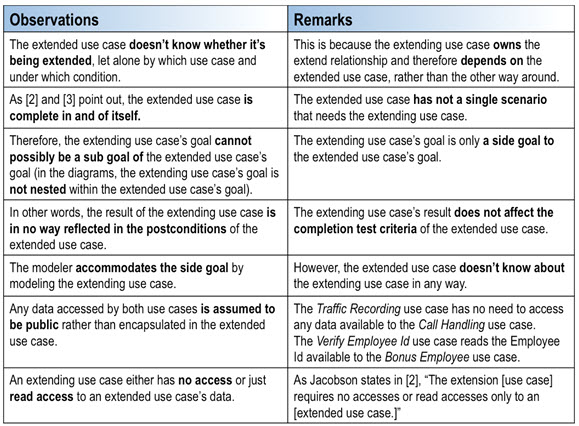 In summary, an extension use case always represents a side goal to the extended use case’s goal (the former is not nested within the latter).

These four patterns (see article’s part 1 for the first two) result from ‘separating concerns’, which in this case requires recognizing the difference between:

In keeping with the article’s theme, this section compares and contrasts the notions of ‘deviation’ and ‘augmentation’ extension use cases introduced above.

Part 3 compares and contrasts a few more pairs of use case model elements and explores whether use cases can be instantiated in their capacity as included, extending and generalization use cases.

NOTE
(i) The comments added to [1.2] introduced the example of a word processing application with an extended use case Edit Document and an extending use case Check Spelling. Even though this could serve in principle as an example of an ‘augmentation’ extension, it is purposely avoided here, for the following reasons.

[2] Ivar Jacobson, Use Cases and Aspects – Working Seamlessly Together, Journal Of Object Technology, Vol. 2, No. 4, July-August 2003.