Generalization and Use Case Models, Part 1

Written by Willem Van Galen on August 12, 2013. Posted in Articles.

The best way to promote a common understanding of generalization is through a simple object-oriented example, especially since use case models are founded on object-oriented principles (i). Most of the concepts encountered in the example trace back to [1] and [2], which strike me as highly informative books.

In defining these concrete classes, we may notice that they have certain kinds of characteristics in common (e.g., they both have the ‘color’ attribute). This is a clue that we can generalize these classes to a superclass, like Furniture Piece, to represent what tables and chairs have in common.

Furniture Piece represents a ‘generalization’ of (the objects in) its subclasses, as depicted in the following diagram. 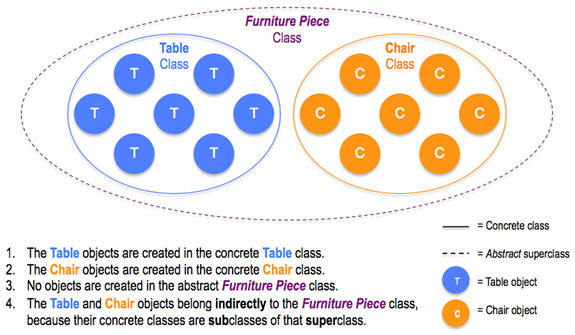 Generalizing classes creates a class hierarchy. In this example, it starts with a flat structure of two concrete classes that reflect what their objects are in and of themselves, which is then expanded into a hierarchy by adding an abstract superclass that represents what objects in the two subclasses have in common.

The class hierarchy in the diagram above is represented below as a class diagram, expanded with some attributes (iii), an association, and some operations (see later). 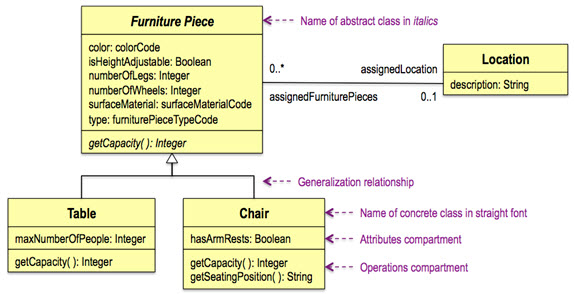 A key feature of a class hierarchy is inheritance, in which kinds of characteristics defined for a superclass are inherited by its subclasses.

Inheritance is a class construct, not an instance one.

Likewise, the Table and Chair classes inherit the association with the Location class from the Furniture Piece class, such that each Table and Chair object may have a link to an ‘assigned location’.

A class hierarchy can also result from specialization. This means introducing a subclass, and representing how it differs from its superclass by defining kinds of characteristics that apply to the subclass but not to the superclass (iv).

Apart from inheriting attributes and an association, Table and Chair also inherit the getCapacity operation (vi). An operation on a class represents that an object in the class is capable of a named behavior, in this case, getting its capacity.

So, providing a method for the superclass’s operation is deferred to the subclasses.

An alternative pattern for modeling the getCapacity methods is as follows.

Adding an operation and its method

Chair has an operation over and above the one it inherits.

The added operation helps to define Chair as a specialization of Furniture Piece.

In philosophy, there is a difference between a type (which represents a certain concept, like chair) and a class (which is a collection of objects, such as tables and/or chairs).

Even so, there is still a linguistic distinction, because an object ‘is of’ a certain type but ‘belongs to’ (is a member of) a class. At minimum, an object that is of a certain type belongs to the concrete class in which it is created; if that class has any superclasses, the object belongs to those as well, albeit indirectly.

A key measure of the correctness of a class hierarchy is type correspondence. This means that the statement ‘

Let’s now turn to generalization (and specialization) in use case modeling.

Why actors can be generalized

A concrete use case has one and only one initiating actor (viii), but what if some of a system’s use cases can be initiated by users of different kinds, such as Contact Centre Specialists and Customer Statement Specialists? Actor generalization solves that problem, as illustrated in the following diagram. 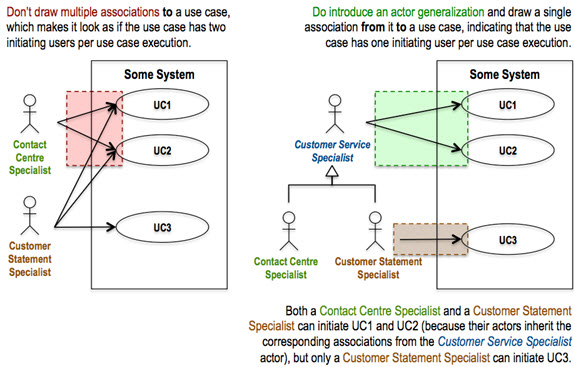 What an actor means

The earlier object-oriented example deals with electronic objects internal to a system, each of which comes into existence by being created in a concrete class. In contrast, the notion that actor instances are created in concrete actors doesn’t apply, because:

When an actor is concrete, it means that entities are assigned to it, not that they are created in it.

In fact, we need to be aware of two modeling patterns, for which I use the following terms and definitions.

Thus, the earlier class hierarchy reflects classification, while the above actor hierarchy represents categorization. The next diagram shows the latter (x). 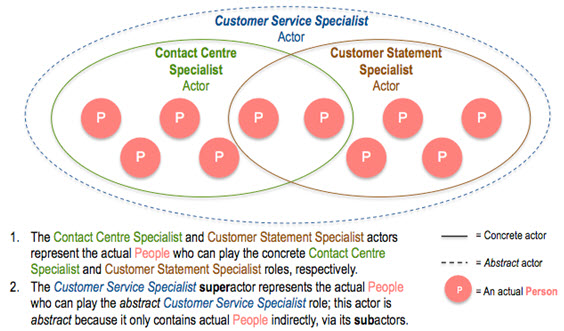 Like the Furniture Piece class in the object-oriented example, the Customer Service Specialist actor is abstract, because it is completely partitioned (i.e., completely subdivided into subactors).

Unlike the Furniture Piece class, the Customer Service Specialist actor is not ‘disjoint’, but ‘overlapping’ (as [3] calls it), because a given person can in principle belong to multiple subactors at once (a clue we’re dealing with categorization, not classification).

As for a class hierarchy, ensuring type correspondence is a must for an actor hierarchy, albeit that here the types are strictly the actor names themselves, rather than the types (conceptual or otherwise) of actual users (e.g., Person).

Sometimes, use case texts advocate adding a generalization relationship between two concrete actors. This is only appropriate when any and all members of the subactor are always members of the superactor as well. If not, this kind of actor hierarchy is a misrepresentation, as the following diagram illustrates.

Below are two more examples of an actor hierarchy.

To avoid an inappropriate actor hierarchy, add an abstract superactor as shown earlier, and let the overlapping nature of the concrete subactors handle the scenario where a person can belong to both subactors, through individual assignment.

NOTES
(i) To keep it simple, the example only deals with one abstract superclass and two concrete subclasses.

(ii) Some refer to instantiating an object, which seems inappropriate. Instantiation means representing a concept (e.g., chair) by an instance (e.g., a chair), so it’s the concept that is instantiated, not the instance. In object-oriented terms, a concrete class can be instantiated (can have objects created in it), but an abstract class can’t.

(iii) While most attributes have a data type like Boolean, Integer or String, the data type of each of the remaining attributes refers to an enumeration, which is a list of the attribute’s allowed values.

(iv) Specialization isn’t necessarily the opposite of generalization. You can’t generalize a single class to a superclass, but you can specialize a class to a single subclass. The latter means that:

(vii) Method: a representation of how a class or an object will respond when asked to perform a given operation.

(viii) The examples in 16.3.6 of [3] where “more than one actor instance is involved in initiating the use case” can be represented more simply as one initiating actor and one supporting actor.

(ix) There are entities that change types during their existence (e.g., a caterpillar changes to a butterfly), but such type changes are outside the scope of this article, because they usually don’t have to be dealt with in a typical system.

[2] Bruce F. Webster, Pitfalls of Object-Oriented Development: A Guide for the Wary and the Enthusiastic, 1995, M&T Books.