Written by Christina Lovelock on December 2, 2020. Posted in Articles.

You may be interested in developing your leadership skills as a BA – but have you ever stopped to think about the quality of your followership skills?

We live in a world where the quality of leadership is considered to be absolutely critical to the success or failure of projects and organisations, but almost no emphasis is placed on the concept of followership. The role of ‘followers’ in organisations is often minimised, though clearly good leadership relies on good followership to actually get things done.

There are negative connotations with the word follower, no one wants to see themselves as a follower, we all want to emphasise our leadership skills and qualities. We seem to ignore the fact that being a leader almost always involves being a follower too. Everyone has a boss.

There are many leadership styles. Some are adopted consciously by leaders who understand their own values, reflect on their own behaviours and understands the impacts of their words and actions. Others are the product of default actions or inherited approaches. Leadership has been the focus of a great deal of academic research, thousands of books, millions of seminars, webinars, training courses and qualifications. The implication is clear: leadership is a skill that can be taught and honed. Where is the training on becoming a better follower? Who would attend that course?

Being an effective follower does not mean always agreeing with those in leadership positions, it does not mean blindly going along with any idea or initiative which comes from leaders. It is about taking responsibility, owning problems, appropriately challenging things which don’t make sense or could be improved.  Leaders need followers they can count on to tell them the truth in a professional, concise and constructive way.

Being a good follower is something we can take pride in as BAs, as it depends on two skills we already have. The first is critical thinking, the second is active participation. 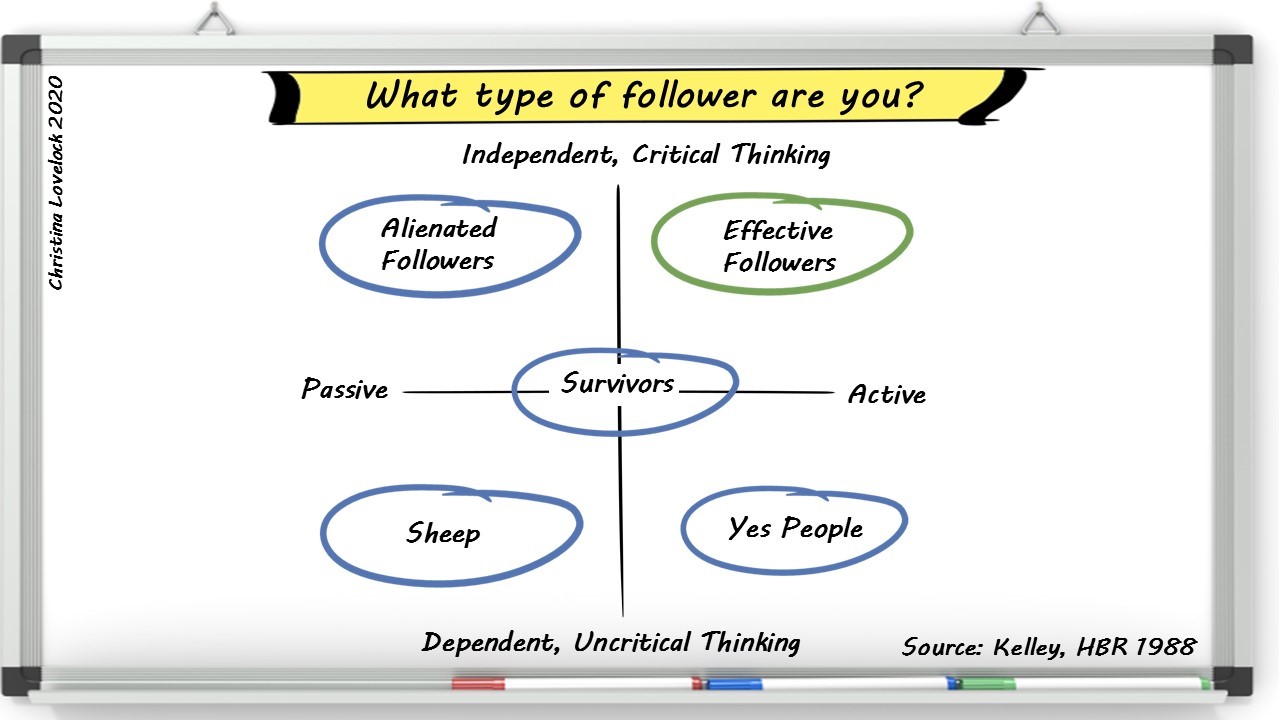 Business Analysts must apply critical thinking skills all the time to be successful in our roles. The term ‘critical thinking’ encompasses the ability to systematically solve problems, construct and evaluate arguments, make logical connections, highlight gaps and inconsistencies. All of these skills can be applied in a positive and collaborative way and ‘critical’ should not be confused with ‘criticism’.

Leaders should encourage independent thinking from their followers, as leaders cannot provide all the answers and need input and scrutiny for the ideas and strategies put forward.

When we choose to act or not act, care or not care, volunteer or step back, we are sending clear messages about our levels of participation within our organisations. BAs often rail against the deterministic attitude of “we have always done it that way” or nods around the table leading to no action, and we must be vigilant about these  behaviours in ourselves.

‘Activism’ may or may not be in line with direction set by leaders. It is the role of leaders to listen to dissenting voices, if they have applied critical thinking and are actively participating even if it is not what the leader wants to hear, and it is the role of followers to engage in a positive and constructive way even if they don’t like where the leader is headed.

Participation begins with the courage to speak up, and in particular ask good questions, which is something BAs should be well practiced in.

Many BAs do not seek  traditional leadership positions, but do want to have a level of influence, feel our voice is heard and make a positive contribution. This utopia is often described as becoming a ‘trusted advisor’.  How can we become trusted, so that our advice is both sought and impactful? There is no single route to becoming a trusted advisor, as it is dependent on the organisational context, levels of knowledge and experience, relationships and hierarchies, our attitude and the approach of those around us. But it starts with two skills: making an active contribution and applying critical thinking and (in other words,  being an effective follower!).

If we are able to move away from the negative connotations of being a follower, and see the role as equal but different to leadership, we can recognise the importance of both skill sets.

By considering the quality of our followership skills, and prompting conversations about the type of followers that contribute to the success of organisations, we can promote participation, celebrate critical thinking and achieve better outcomes together.

Christina is an experienced BA leader, has built BA teams ranging in size from 5 to 120 Business Analysts and champions entry level BA roles. She is active in the BA professional community, attending and regularly speaking at events. Christina is an examiner for the International Diploma in Business Analysis and is also a director of the UK BA Manager Forum. She has co-authored the 2019 book, Delivering Business Analysis: The BA Service Handbook, which shares insights and findings from research into Business Analysis, practical guidance for BA leaders, and case studies from across the professional community. https://www.linkedin.com/in/christina-lovelock