Last year, I got my first exposure to event-driven architecture (EDA), courtesy of several systems architects in our organization. Our systems architects operate in the “physical” (technology-specific) realm, whereas our systems analysts are active in the “logical” (technology-neutral) world. As a systems analyst, I became interested in how we could take advantage of EDA in our logical deliverables (why should architects have all the fun?). This article outlines a standard approach for representing basic EDA aspects in system use case models. A major inspiration for this approach is the wonderful article “How EDA extends SOA and why it is important” by Jack van Hoof. If you’re unfamiliar with this article, I encourage you to read it.

As it turns out, there are two fundamental ways in which use cases can be coupled: command-and-control and publish-and-subscribe.

Key questions are, of course:

To address these questions, we introduced the Event Manager as a logical system (i.e., represented by its own use case model). The Event Manager is separate from all other logically represented systems (i.e., that all have their own use case models) but is instrumental in connecting (use cases of) these systems into a network. (I use the generic term “system” to denote either a traditional system or, in a service-oriented context, a component; either classification works for the Event Manager.) This is summarized visually in Figure 1. 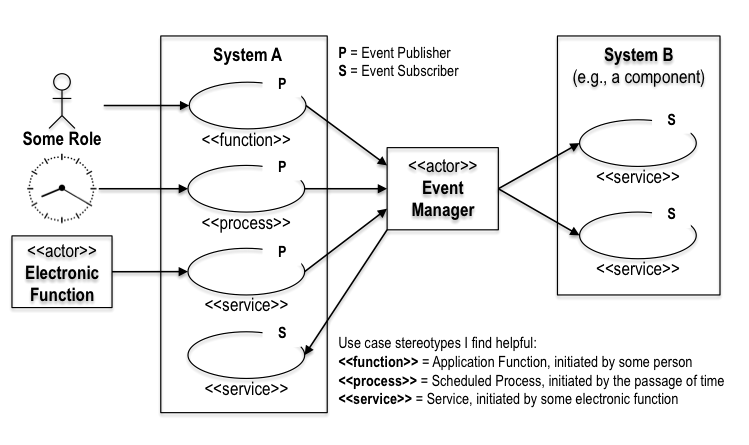 The Event Manager is the keeper of the Event Type Registry. This registry contains:

This registry is the central location where systems analysts record the modeling decisions they make when they apply the publish-and-subscribe pattern to model loosely coupled use cases to represent asynchronous system processes.

Since the Event Manager is a logical system, it’s instructive to represent it through its own use case model. Figure 2 shows the model’s use case diagram.

The Event Manager’s two use cases can be summarized as follows.

Each publisher use case is modeled according to a standard pattern:

Each subscriber use case is modeled according to a standard pattern:

How systems architects decide to implement physically the system processes that are represented logically as loosely coupled use cases is for them to decide. Systems analysts are able to indicate clearly and uniformly when and which system processes are loosely coupled. Systems architects can take their cue from that. Based on the technological means available to them, they can utilize the latest EDA technology or devise a more traditional implementation, like a batch process that periodically monitors a database for specific types of changes that informally reflect certain events. Whatever the choice, it doesn’t alter the logical representation. In that sense the logical and physical realms are loosely coupled themselves.

This pattern doesn’t yet accommodate human event subscribers outright, but this may be added later.  It must be noted that such an enhancement:

Extending that further, this approach can conceptually be applied to business use cases as well.

Don’t forget to leave comments below.