Written by Kupe Kupersmith on September 1, 2009. Posted in Articles.

Let me share a little about me. I love my family, the business analysis profession, professional sports, Rocky Balboa, and Bruce Springsteen. When my loves blend I couldn’t be happier! It happened a few weeks ago when the Dallas Cowboys unveiled their new $1 Billion; yes that’s a “B”, stadium. Pro sports and business analysis came together for me. Let me explain. 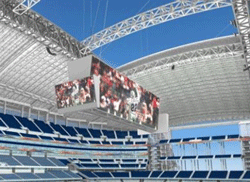 Jerry Jones, the owner of the Dallas Cowboys, who I do not love since I am a NY Giants fan, had a pet feature for this stadium…sixty yard long, high definition screens that are 90 feet above the field and run along the side lines.

Prior to having the screens constructed the Cowboys allegedly showed the specifications to the NFL, National Football League, and obtained sign-off to move forward. The screens were built and installed. Although I have not been to the stadium they look really cool.

The hype around the screens was all positive until the third quarter of the first pre-season game. The opposing team’s punter kicked a ball right into the screen causing a do-over. Just like that the stadium “project” went from a success to a big concern in some critical stakeholders’ eyes. The NFL is now reviewing the situation, the height of the screens, the impact on games, etc. A decision will be made soon if the screens need to be moved, who has to pay for the work and when they can safely be moved, if necessary.

So, what does sign-off really mean? Does sign-off of a requirements specification mean anything if the end solution does not meet the needs of key stakeholders? In the case of the Cowboys, they’ll most likely argue to the NFL that they received the necessary approval on the plans. This may result in the NFL picking up the tab for the move of the screens, but there is still an impact to everyone involved. In my opinion only having this type of sign-off is worthless. If you stop there, all it does is allow parties to place blame on other parties. Why do you think so many customers are skeptical about signing off on requirements documents?

Now, let’s talk about the right way to obtain sign-off. The Indianapolis Colts, who I am impartial to because they play in a different division than the NY Giants, were planning on a similar screen set-up when they were building their new stadium. To verify the screens would not impede the game, they built a “prototype” of the screens and had their punter try to hit the mock screens. He was very successful in hitting them which resulted in the team changing the design and placement of the screens due to this simulation. Now that’s what I call sign-off you can be confident about.

In addition to my disliking the Cowboys, the moral of the story is you need to make sure you obtain the right level of approval throughout a project. At different stages of a project you need to take the opportunity to ensure you are headed in the right direction. I think the Cowboys did the right thing about getting the plans approved. The issue was they stopped there. By simulating the scenario with their punter, the Indianapolis Colts were able to obtain the right level of approval.

I’d love to hear your sign-off stories, good and bad!

Jonathan “Kupe” Kupersmith is Director of Client Solutions, B2T Training and has over 12 years of business analysis experience. He has served as the lead Business Analyst and Project Manager on projects in various industries. He serves as a mentor for business analysis professionals and is a Certified Business Analysis Professional (CBAP) through the IIBA and is BA Certified through B2T Training. Kupe is a connector and has a goal in life to meet everyone! Contact Kupe at [email protected].