Progress over Perfection: Should you embrace the 80/20?

Written by Bob Prentiss on January 26, 2015. Posted in Articles. 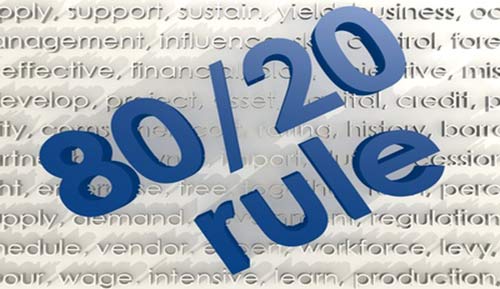 Have you noticed lately that there are a lot of industry “buzz words” and “phrases” that seem to be driving your corporation’s strategy and your every day approach to work? “Agile”, “agility-minded”, “progress over perfection”, “fail faster”, “do more with less”, and “get stuff done” are a few of the common ones these days. These are all challenges that are being issued on a daily basis. You know what? I don’t disagree with those challenges. I think it is a natural decision for leaders to make as they strive to make the bottom line or find creative ways to increase profits, but is it doable?

How does one measure the merit of progress over perfection? The idea that something does not need to be perfect, it simply needs to be good enough? The Pareto principle, also known as the 80/20 rule, states that 80% of effects come from roughly 20% of the causes. 80% of sales come from your top 20% of your clients. Even Pareto’s pea pods in his garden showed that 20% of the pods contained 80% of the peas. One can look at this as you should not be working harder, you should be working less. Notice I did not say “smarter”? That is a given. Working less, is not, and will take some convincing on your part to get your leaders on board. What if you started employing the 80/20 rule and adding the concept of progress over perfection, and recognize that you don’t need to be 100% perfect to achieve superior results? For me, I became convinced when I recently did a stint of 36 hours in hospital isolation, along with 9 doctors, 6 RNs, 4 technicians, 2 floor monitors, 14 vials of blood, 16 needles, 6 doses of blood pressure medicine, 1 CT scan, 1 set of x-rays, $15,000.00 of medical care, and some morphine.

The following is a true story of how my hospital visit showed that progress over perfection, and the 80/20 rule, can be a very valuable practice indeed. On Sunday, November 29th, 2014, at 12:15 AM, we were packing for our 7 AM return trip home from a very relaxing and fun “avoid the relatives at Thanksgiving” weekend. If you have not had the opportunity to do this, I highly recommend it. Chicago has a lot to offer Thanksgiving weekend and a little less holiday dysfunction is sometimes just what the doctor ordered. However, at this time, I felt a rattle in my chest. My first thought was “Chest cold? Figures.” One minute later, when I started to cough up blood, (and not just a little mind you – 1-2 teaspoons per cough) I had a sinking suspicion that the night was not going to go well for me. Now, you would think that the obvious decision to go directly to the emergency room (without passing Go!) would have been an easy and smart decision. Instead, when it appeared that the bleeding had stopped, I rationalized that the incident was akin to a “nose-bleed” and the need to go to the ER had surely passed its time. Two hours later I had a similar but more defining attack, and yet I still did not go to the ER. Why? Because I can rationalize anything and I loathe hospitals (c’mon, I know I am not alone on this one)! Three hours later, when I was having a third, and much worse attack, watching my vision decrease to a pinpoint, recognizing that I was in fact, drowning in my own blood and was potentially going to die, I somehow made a large effort to relieve my lungs at the last second and somehow did not pass out. Third times the charm, to the ER I go.

Immediately upon entry to the emergency room, I was given a mask, ushered into an adjoining area away from people, asked a few pertinent questions about Ebola, Tuberculosis and how I felt, then within two minutes escorted into a temporary isolation room. First rule of thumb, don’t worry about perfection, remove the patient from 80 percent or more of the population. The needs of the many truly do outweigh the needs of the few.

I then met my first two doctors, who gave me morphine to calm and suppress my cough, and hopefully stem any bleeding that might be happening. My blood pressure was a calm, cool, and collected 221 over 117. Yes, it is a minor miracle I did not also have a stroke. Their goal? Rule out the most infectious diseases that are problematic right now; Ebola and Tuberculosis. Did they really need to ask me questions about Ebola? Well I do travel a lot. I had been to Victoria, British Columbia, but surely it was not the hotbed of Ebola everyone thought it was, so ruling out Ebola was pretty easy. That and I had no other symptoms. This is where their 80/20 rule and deductive reasoning got bogged down. I did not fit the stereotype. I did not have the symptoms they expected. They were not going to get perfection here so forge ahead they did.

I was moved to a more permanent isolation room with a negative airflow venting system – that does not allow the air from my room to get out to the rest of the hospital. There was a room to actually get into my room. Which can be disconcerting as you watch a hoard of doctors outside your door in their private room, clearly conjecturing about their “flavor of the month” patient. They all wanted a piece of me, it was quite clear, especially now that they did not have Ebola and Tuberculosis to throw around. Having said that, I must say, if you really have to be in the hospital, this is the way to go. The room is huge, extremely private with no roommates, and the negative airflow venting system was a lovely white noise to doze off to. There were some other perks too but bragging about a hospital room seems awkward at best. Doctors 3, 4, 5, and 6 enter into my room looking just short of a HAZMAT team out for an evening stroll. They start in with 20 questions, ordering lots of blood draws for testing. “Hey guys… I already lost a pint, take it easy okay?” Their goal? Rule out autoimmune diseases so no one can give anything to me and make my lungs worse. Doctor 6 insists the blood came from a cut in my throat. Really doctor 6? Really??? Well, this is progress over perfection.

Doctors 3 and 4 were joined by doctors 7, 8 and 9. Doctor 3 tells everyone that they can finally remove their masks. I am not contagious, and I have no autoimmune diseases so I won’t catch anything. For some reason they did not believe me and relied on the tests. The doctors remove their masks and look less HAZMAT ready. Doctor 9 tells me that in a certain number of people that have digestive problems, they develop blood vessels that can explode in their esophagus or stomach. In less than 1% of those individuals, they have blood vessels that explode in their lungs. Now I do not have digestive problems, but if the shoe fits Cinderella, it fits. It is progress after all. And it seems to be the only thing that makes sense given how high my blood pressure was. Their 80/20 goal? Stabilize the patient, get my blood pressure down and send me home. I am not in danger of bleeding anymore, or infecting anyone, so I can be seen by a specialist at home. The problem? The blood pressure would not go down. They can’t let me go. I am still their “flavor of the month”. It took 6 doses of blood pressure medication in a 24-hour period and three different approaches before they made a tiny dent in the blood pressure. It was not perfect, and they kept trying. Let me out!

The doctors were struggling with all of the things that we do on projects every day. Lack of definition of the problem, defining scope of the effort, getting buy-in from stakeholders, figuring out who makes the decision, who is accountable, even how detailed the requirements need to be. Everything they did in the hospital was 80/20. The 80% most harm came from the 20% most damaging, so they ruled it out. Each step of the way was to work less. That is why they had 9 doctors. Each one brought something to the table (even doctor 6). Rather than try for perfection with one doctor, or try for perfection to rule out all 100%, they exercised progress over perfection. If they had done all of the things in the hospital that they could have done, needed to do long-term, I would have been there a week and the bill would have been over $60,000. So do I believe in progress over perfection and the 80/20 rule? Yes I do. The doctors used deductive reasoning, went after the 80/20 that made sense, had a decision maker that was accountable but also okay with if it was not the right decision, and kept trying to get it right.

So how can you apply the Pareto principle and progress over perfection to your work today? Make a list, check it twice, and decide that most of it is naughty and not nice. Focus on the 20% of the work that will actually add value to your day. Working overtime on minimal-value adds is a waste of time. You will notice I said “minimal” and not “non”, I think you are smart enough to realize that you need to constantly look at your work and chuck out “non-value added” work. However, most of us still try to do the “minimal-value added” work too. Why? It is MINIMAL. What will it really get you? I have just completely reprioritized my life. I am changing my business model, and I am changing my life. Why not help out yourself and help out your company by not doing more, but by doing a lot less? By the by, I completely agree that there needs to be a change in how management looks at progress over perfection without punishing the people when/if it fails (but that is another topic for another day).

For those of you wondering how it all turned out… I was sent to a pulmonologist to have another CT scan and a bronchoscopy. The latter procedure is not pleasant. Tests were run, biopsy done, and tests came back with no cancer! In the end, exploding blood vessels in the lungs is the only answer I will ever get. I now take blood pressure meds every day; I have curtailed caffeine and alcohol and will be starting to work on that Paleo-like diet. I have been given a second chance and I am going to do a lot more looking at the Pareto principle, and striving for progress over perfection in the coming months. So do you have any stories of success where you have succeeded in with the 80/20 rule and progress over perfection?