Written by Mark Jenkins on December 1, 2009. Posted in Articles.

The fourth and final part of my “Reinventing…” series (which ran in Business Analyst Times earlier this year; see links at end of article) concentrates on a project portfolio rollup chart. Since this charting technique also includes and tracks business priority, I call this communication tool the “Project Barometer”.

As with the previous articles, the chart attempts to maximize the amount of information a single diagram can communicate, without overwhelming the reader. However, unlike the previous techniques, which required the use of Visio, the barometer takes advantage of the simplicity of Excel.

For a BA who is actively involved in managing an IT to business relationship, questions regarding project status and upcoming effort are common. I use updates from my team as well as updates from other groups to collate a chart that helps to quickly respond to such prompts as, “What are you guys working on?” or “What is the priority of this project?” by providing relevant information at-a-glance. The aim is not to provide a detailed breakdown of the status of each project; that is better left to your project management team, but to use the Barometer as a communication tool to assist a stakeholders understanding of your IT program at a macro level.

The development of upcoming priorities is also something the barometer tracks effectively; my BA team is also tasked with managing the upcoming IT workload, forming a demand queue through turning stakeholder ideas into project proposals. As such, we use the Project Barometer to help prioritize these stakeholders’ ideas, which we then communicate to the IT management.

Lending a greater level of visibility before a project gets off the ground, the Project Barometer helps individual departments to align themselves with and keep focus on current efforts.

A key part of the BA role is to pinpoint areas of project neglect (areas where a project may have missed stakeholders or scope, downstream impact, etc.). This tool has proved extremely valuable, both in department reviews and, in a more proactive sense, for stakeholders or departments to view at will. I have also found this technique equally appealing to executives and individual contributors for the facile communication and information transfer it procures. Without the Project Barometer chart, our BA team would not be as effective.

When designing this chart, I thought about some of the common problems faced by IT employees, managers and business stakeholders. Typically, project status updates take the form of multiple page documents, PowerPoint presentations and/or meetings to deliver this information, which can be difficult to navigate and time consuming. Although highly detailed reports serve a valuable purpose, the Project Barometer extracts relevant information from those reports and organizes it in a simple, unambiguous chart made accessible to all involved parties. As response to questions regarding status, priority, and effort, the Project Barometer provides immediate information in a concise, visual manner. Such an at-a-glance informational tool becomes ever more important the higher up the corporate ladder you go.

With those parameters in mind, I wanted to find a way to fit an entire program status on a single page. The Project Barometer is a result of these efforts.

My barometer consists of 11 columns, which, in order from left to right, track priority, project name, project status, effort and the stages of the SDLC.

The rows are filled with the individual projects grouped together by department. The Sales and Marketing groups are shown here, each separated by the blue bars.

Within each cell, a coding scheme is used to communicate relevant information, I include a legend at the bottom of the barometer but, for the most part, it is self explanatory.

In this next part of the article, I’ll provide a step by step guide to building your own barometer.

The easiest way to begin is to list all of your projects currently in progress. For each project, think about the amount of effort involved and which group owns which project. The grouping of projects by department is one of the things that make the barometer useful.

At the end of this effort you should have a list of projects, grouped by department and assessed for effort, such as the example below. 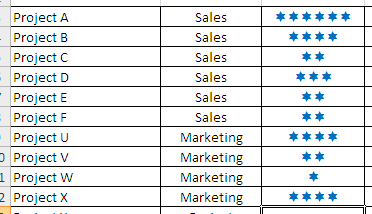 The next step is to think about the stages you track in your SDLC, typically it will be something like the completed barometer shown above, but because Excel is so easy to use, you can adjust the columns as required.

It is now a simple exercise to add either the date the stage was completed or the percentage of completed progress to the individual cells.

It would be reasonable to stop here and have a functional chart, but as we saw above, there is more information we can communicate. In order to make the chart easier to read, I grouped the projects together by department. To do this I simply merge a row of cells and then, for each section, add and repeat the headers. Moreover, I add the key stakeholder for each department; this is the person you would work with to set the priority of each project.

To communicate a clearer idea of progress, we can apply colors to the stages. We’ll follow the standard traffic light format, green for good, amber for minor issues, red for major issues. If a stage has been completed, I always set it to green.

During my barometer design, at this point I didn’t feel like the chart was providing as clear a picture as possible because I had all the stage progresses annotated the same way. It makes it hard to differentiate, at-a-glance, between completed and in-progress efforts. To eliminate this problem, when a stage is completed, I change the text color to a light green. This has the effect of making the white, in progress stage, stand out more. As you progress to making larger barometers with a greater number of projects, this effect will become more vivid.

We now have a completed diagram mapping the current program status, but what about priority? What about upcoming ideas? As I demonstrated above, this can be built into the same diagram with minimal effort. To tackle priority, I simply add two columns, one labeled “Priority” which tracks position (position one should be the most important project to the stakeholder), and the second column labeled “Movement,” tracking any priority changes. The addition of these two columns makes the barometer a great negotiation tool.  Combining the Project Barometer with the Resource Chart forms a powerful arsenal of persuasion, with the odds stacked in your favor.

Dealing with the practicality of keeping the chart current, if a project is added with a higher priority than existing efforts have or a project priority is downgraded, I generally only show the movement of the added or downgraded  project (i.e., I don’t show the shift in movement through the list of each of the others).

Adding and prioritizing upcoming ideas or requests is also easily facilitated. Add an extra column for status, add the ideas and then update as needed. You could also track any kind of status here. You may have a designation for small projects and large projects, for example.

The diagram is now nearly complete, once the version and date range are added. I typically update at least three times a week.

In summary, we have again created a simple but highly readable diagram to demonstrate the current status of projects and ideas, and in so doing, provide a complete picture of the program.

I’ve received some positive feedback on this series of articles, so thank you for taking the time to read and reply with your comments. In the majority of emails, I receive requests for a template. Now that I have finished the series, I’m working on bundling the templates and stencils into something you can all download.

Mark Jenkins is Manager Business Analysis Group at Websense. Mark has spent the last year establishing this formal business analysis group that now plays an active role in all major business projects at Websense. As part of the development, he created new process and documentation standards, which assisted in the overhaul of IT Project processes, placing the BA Group at the forefront of the IT to business interactions. He can be reached at [email protected] and on twitter www.twitter.com/JenkoUK