Start Your Own Business Analyst Tradition

Written by Kupe Kupersmith on April 13, 2010. Posted in Articles. 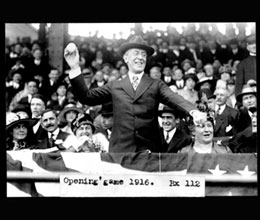 With spring comes Major League Baseball in the United States and Canada. With baseball comes tradition. One of the great traditions of baseball is the ceremonial first pitch. Before each game a guest throws a ball to a home team player to end the pregame festivities and mark the beginning of the game.

April 5, 2010 was the 100th anniversary of the first Presidential Opening Day ceremonial first pitch. It has become part of the normal routine for starting a game. Everyone knows that once that pitch is thrown it is time for the game to start. Grab your hot dog, peanuts, and beverage and sit back, relax and enjoy the game. This tradition is as consistent as it gets. It is what we have grown to expect. I’m not sure why, but something would not feel right if there was not a ceremonial first pitch.

As a business analyst you need some traditions, too. You need consistency so your stakeholders know what to expect from you. As a BA being completely consistent is not a great thing. Using the same techniques on all projects is not the positive consistency I am after. As I have said before, every project is different. You need to determine what adds value to a project and do not do something just because that is how you have done it for years. You don’t want your stakeholders to expect you to do more than is needed for the project. There are things that can be done consistently that do add value. For starters here are two areas where you should be consistent.

When colleagues are getting ready to approach you, can they always anticipate a positive interaction? Can your coworkers reasonably anticipate your behavior from one situation to the next? When they come to ask you a question, are you sometimes very open and engaged and other times pre-occupied, and do not give them the attention they need? I am not saying you have to be available for everyone all the time. Even if you don’t have the time you can be open and approachable. If someone walks in your office and you don’t have time to talk, ask to schedule some time later when you’ll be freed up. People will respect that and understand. This way people will know that when you do have time, you will give them your full attention.

Do you start and end meetings on time? I know we work in an environment where we are in and out of meetings. If you are consistent with your start and end times, people know what to expect. More people will start showing up on time. Sometimes it is almost impossible for someone to show up for your meeting on time or stay until the end. When meetings are back-to-back it is physically impossible to be at one meeting until the end and make it to the next meeting on time. Try one or both of these tips (traditions) on meeting times and your attendees will thank you.

Do you manage your meetings consistently? Do you stick to common meeting ground rules?

During a customer meeting I was facilitating, five out of the six attendees were on their Blackberry. After a failed attempt to get everyone to put their Blackberry’s away I packed up my stuff, explained I would reschedule the meeting and started to walk out. Talk about shock factor. They tried getting me back and I refused. I told them in a very nice way that obviously they had important things to get done, so I would let them get back to their desks. The rescheduled meeting was Blackberry free. My customers knew what to expect from me.

What are some of your traditions? What do your customers know what to expect from you?