As we look ahead into the next century, leaders will be those who empower others.
Bill Gates

In article 6 of this series, we discussed an approach to building a capable BA workforce able to manage the complexity of your team’s project assignments. In this article, we discuss the need for the BA Practice Lead, as well as the BA, to become effective leaders of teams. Your job is all about building and sustaining high-performing teams.

What’s the big deal about teams?

Complex projects are challenged today because of people failing to come together with a common vision, an understanding of complexity, and the right expertise. Virtually all work today is accomplished by teams of people. Sometimes teams of teams consisting of groups around the globe. Team leadership is different from traditional management, and teams are different from operational work groups. When leading high-performing, creative teams, it is no longer about command and control; it is rather about collaboration, consensus, empowerment, confidence, and leadership.

So, outside of sports, what high performing teams have been a wonder to your eyes? Let’s just begin to identify some of them and the nature of their sustained high-performance. We will name just a few. I am certain you could add to this list.

Paramedic teams mean the difference between surviving and succumbing to an overwhelming force. Paramedics provide medical care at an advanced life support level in the pre-hospital environment, usually in an emergency, at the point of illness or injury. This includes an initial assessment, a diagnosis and a treatment plan to manage the patient’s particular health crisis. Treatment can also be continued en route to a hospital if more definitive care for the patient is required. Paramedics almost always work in teams of two to four specialists, each fully understanding his role, and how it integrates into the whole approach to assess the degrees of urgency to wounds or illnesses and provide life-saving interventions. It is about the importance of the mission and the team resolve.

I once met a New York City firefighter who had been with his squad for decades. I asked him how he handled such a pressure-filled job. His answer: “I would pay them to let me be a fire fighter.” He was talking about the camaraderie, the spirit, the brotherhood, the importance of the mission. Think 911 or Hurricane Katrina.

I have a sister who is heading up an NGO at the United Nations. She mentors interns and high-school age young women and men to become involved in global solutions to problems such as the trafficking of women, the poverty and environmental health issues of communities that are adjacent to coal mines, the basic right of all to have access to clean drinking water. She says she had her dream job. It is about the importance of the mission and collaboration with other world-changing NGOs.

Today the Boston Symphony Orchestra, Inc., (BSO) presents more than 250 concerts annually. It is an ensemble that has richly fulfilled their vision of a great and permanent orchestra in Boston. BSO has been the scene of almost two hundred American premieres over the last century. From Wilhelm Gericke to James Levine, each conductor of the BSO has created a legacy of new works introduced to BSO audiences. The BSO Archives houses printed programs, press clippings, posters, photographs, administrative files, an extensive collection of radio broadcast tapes of concerts and commercial recordings. It’s about musical expertise, cultural and historical contributions, and first-rate performances.

Hospital and by the physicians and researchers of the University of Colorado Denver School of Medicine. Among them:

Navy SEALs are a unique breed of warrior who conduct special operations in any environment, but who are uniquely trained and equipped to operate from, around and in maritime areas. SEALs take their name from the environments in which they are trained to operate: sea, air and land. Their small highly trained teams usually work quietly at night conducting some of the nation’s most important missions. SEALs are constantly deployed throughout the world to protect national interests.

Think Seal Team Six, sometimes referred to as the Special Mission Unit. ST6 is a multi-functional special operations unit with several roles that include high-risk specialized missions. Required entrance skills include combat experience; language skills; and the ability to blend in as civilians during an operation. Members of ST6 are selected in part because of the diversity of skills of each team member. The ST6 training schedule is without comparison in its intensity. Though highly classified, they are renowned for their barely credible, almost fiction-like accomplishments.

ED BAIG OF USA TODAY DECLARES IPAD AIR THE BEST YET AND “BETTER THAN ITS ALREADY BEST OF BREED PREDECESSORS, SUPERIOR STILL TO EACH AND EVERY RIVAL BIG SCREEN SLATE THAT I’VE TESTED. APPLE DOMINATES THE TABLET APPS ECOSYSTEM. ITS TABLET REMAINS THE EASIEST TO USE.”

DAMON DARLIN AT THE NEW YORK TIMES WRITES, “COMPARED WITH THE OTHER TABLETS ON THE MARKET, APPLE STILL HOLDS THE EDGE.” HE HIGHLIGHTS MANY OF IPAD AIR’S KEY FEATURES INCLUDING SIZE, BATTERY LIFE, PROCESSING POWER, STORAGE, AND WI-FI WITH MIMO.

ON HIS BLOG, DAVID POGUE IS IMPRESSED WITH THE BATTERY LIFE, SPEED, AND DESIGN OF IPAD AIR, STATING, “SOMEHOW, APPLE WAS ABLE TO PUT THE IPAD ON SUCH A RADICAL DIET WITHOUT SACRIFICING ANY OF ITS FEATURES.” READ MORE: APPLE.COM/IPAD-AIR

We could go on and on. There are great teams in every walk of life. So, our challenge is to find out what makes some teams good and others great.

What do all great teams have in common?

Let’s examine what all of the great teams have in common. To a fault, they all include these elements:

In addition, great teams understand strategic criticality of the effort, the mission, and the value of their work products. They all have a common set of values and guiding principles. They are passionate about the mission, the work, the results. They keep score and constantly improve their methods, approaches, quality, training, communications, and therefore, results.

What’s the big deal about teams?

So how do you take your team of BAs from a good team to a great team? 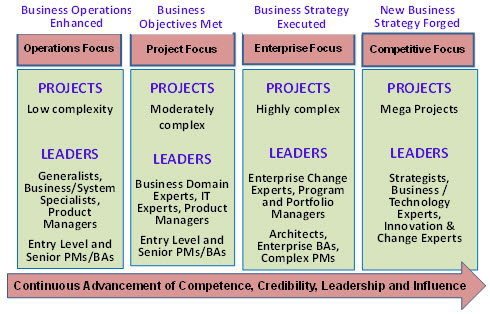 First and foremost, it’s about capability. We once again present the capability model below to demonstrate that as project complexity increases, the capability level of the project leadership team must also increase. The model describes how capabilities evolve from technical prowess to leadership, strategy and innovation fortes.

So, use complexity thinking when making critical project leadership assignments, as depicted in the diagram below. 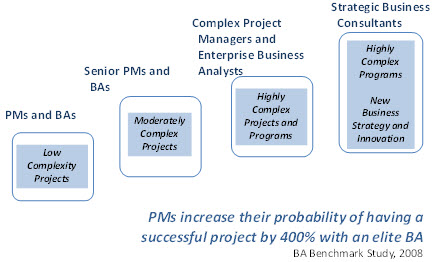 It’s About Filling the Gaps in Capabilities

The graph below demonstrates the typical gap in capabilities when dealing with complexity. We re-introduce the diagram below to depict the findings from the ground breaking research study, The Bottom Line on Project Complexity, the results of which were presented at the PMI Global Congress 2010 North America. The study correlated the current state of BA practice maturity with project complexity and project outcomes.

The industries represented in the study were Insurance (Ins), Financial Services (FS), Information Technology (IS/IT), Government and Non Profit (NP), Health Care (HC), and Transportation (Trans). The diamonds represent the typical complexity level of projects within the industry. The research findings indicate that the average BA maturity level for these industries is 1.68 as represented by the black horizontal line in the diagram. But the complexity of projects mostly fell at level 3, highly complex projects. Therefore, there is a gap between the complexity level of most projects and capability levels of BA practitioners working on the projects. The BAs were also asked to predict the probable outcome of their projects in terms of budget, schedule, and scope (BSS in lower right). The diamonds are color coded to represent the degree of challenge the BAs predicted will be evident at the end of the projects.

Assuming that these research findings are relevant to your current BA team, it is imperative that you take action to close the gap in your BA team capabilities. If you are unable to do so, it is likely that two thirds of your current highly-complex projects will fail or be challenged for meeting BSS (CHAOS Report 2011, The Standish Group). 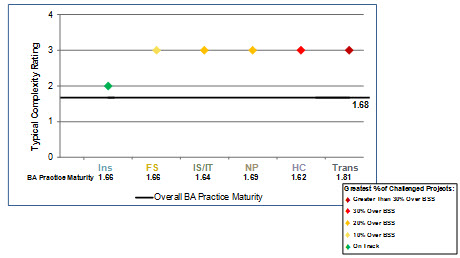 Putting it all Together

So what does this mean for the Business Analyst?

For BAs, continually learn about great teams and effective team leadership. Strive collaborate with the other project leaders (the PM, the architect, the lead developer, the business visionary) to take your current project team from a good, capable group to a great, high-performing team.

So what does this mean for the BA Practice Lead?

For both the BA and the BA Practice Lead, reference Chapter 5: Fostering Team Creativity – the Business Analyst’s Sweet Spot of the book entitled The Enterprise Business Analyst by this author. If you do not have the book on your shelf, you can access it through the IIBA e-library if you are an IIBA member. It provides a more in-depth discussion of building and sustaining high-performing teams. Topics include: