Use Case Goals, Scenarios and Flows

Written by Willem Van Galen on November 13, 2012. Posted in Articles. 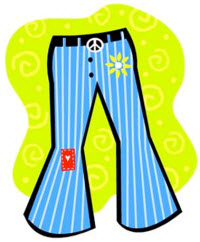 This article is inspired by two more of Alistair Cockburn’s “gold nuggets” found in his book Writing Effective Use Cases [1].  The first nugget is the idea of a goals hierarchy, which represents, among other things, how the goals of a system’s use cases are derived from and trace back to larger goals of the system’s users.  The second nugget is his “striped trousers” explanation of use case scenarios, which are sequences of use case steps that represent different paths through a use case in pursuit of the use case’s goal.  This article also demonstrates a convention for organizing a use case’s steps based on the established approach of writing use case steps nonredundantly by using flows of different kinds.  It even introduces a new kind of flow and advocates its use over that of the extension use case in specific circumstances.

These goals are pursued by different role players (people), organizations (groups of people) and systems (automated resources) inside and outside an organization.

The beauty of this perspective is that:

Cockburn presents a diagram (Figure 2.2 in [1]), whose originality and quirkiness are only exceeded by its effectiveness. He calls it the “striped trousers” view of a use case and its scenarios. In it:

As Cockburn says, this model “is useful for keeping in mind that every use case has two exits, that the [initiating] actor’s goal binds all the scenarios, and that every scenario is a simple description of the [use case] succeeding or failing.”

This strikes me as one of the greatest contributions to use case modeling.

Cockburn points out, “We won’t actually write every scenario separately from top to bottom.  That is a poor strategy because it is tedious, redundant, and hard to maintain.”

Instead, a use case can be written nonredundantly, starting with an unconditional main flow that is subsequently enhanced with conditional additional flows of different kinds, where a flow is a sequence of steps.  The main flow equates to “the main success scenario” and each additional flow represents a portion of one or more of the remaining scenarios.

The UML doesn’t deal with flows.  Cockburn only refers to “the main success scenario” (main flow) and “extensions” (additional flows).  Refining this view, the following sections present five different kinds of flow by providing a definition, diagram and simplified example for each.  The purpose of the examples is to illustrate a clear, consistent and scalable writing convention for representing a use case’s structure (they’re not meant as full-fledged use case specifications).

Definition: An unconditional set of steps that describe how the use case goal can be achieved and all related stakeholder interests can be satisfied.  Each step is essential to achieving the use case goal (no step can be skipped), and each step succeeds.

Cockburn calls this “the main success scenario,” and others use the terms “the happy path,” “the basic flow” and “the normal course of events.”  My preference is for “the main flow” because it’s short and ties in well with the names of the other kinds of flow.

The next four sections outline what collectively can be called additional flows.

Definition: A conditional set of steps that are an alternative to one or more steps in another flow (the alternative flow is performed instead of the other step or steps), after which the use case continues to pursue its goal. 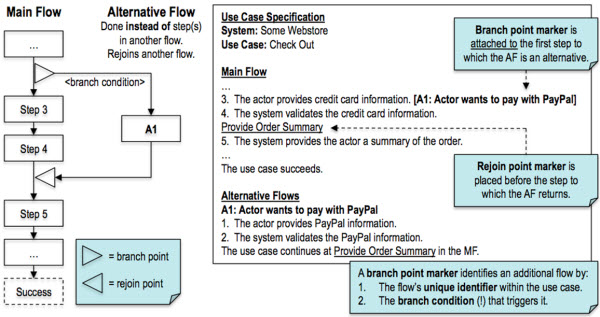 Definition: A conditional set of steps that are a response to the failure of a step in another flow (the recovery flow is performed after the other step), after which the use case continues to pursue its goal.

Definition: A conditional set of steps that are a response to the failure of a step in another flow (the exception flow is performed after the other step), after which the use case abandons the pursuit of its goal. 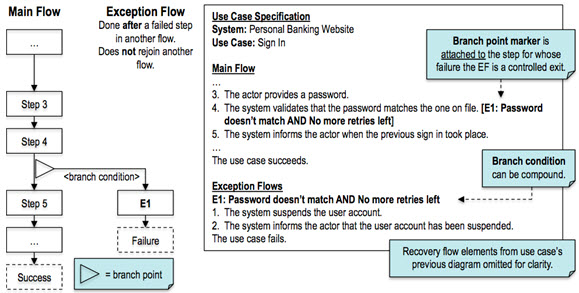 Definition: A conditional set of steps that represent a nonessential option available between two steps in another flow (the option flow is performed between the two steps), after which the use case continues with the second of those steps. 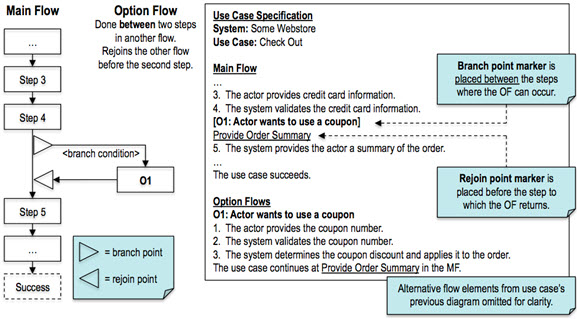 The option flow’s main purpose is to represent behavior that is nonessential to achieving the use case goal (the behavior can be skipped) but that still contributes to that goal in some way (the behavior only has meaning in the context of that goal).

An “option” is like an optional feature in a new car (e.g., sun roof).  Choosing the option contributes to the goal (order a car), but you can order a car with or without the option (a sun roof is not essential).  Continuing the analogy for another term in this article, a car’s possible engine sizes beyond the standard size are “alternatives” to the standard size (but having an engine of some size is essential).

Before taking a closer look at the option flow, here are some comments about branch point markers and rejoin point markers.

More on the option flow

What an option flow is not

An option flow is not:

Use an extension use case instead?

At first blush, the above, and in particular its first two statements, suggests it’s reasonable to represent nonessential goal-related behavior as an extension use case.  However, for a conclusive answer, we turn to the extension use case interpretation outlined in [3].

Based on [3], the next table repeats when behavior can be modeled as an extension use case and gives answers for the behavior of the earlier Coupon option flow.

Regarding the False answers for the Coupon option flow behavior:

This leads to the following conclusion:

Other differences between the option flow and the extension use case

Key to the above conclusion is whether nonessential behavior contributes in some way to a use case’s goal or not.  When it does, using an option flow has undeniable advantages over even thinking about using an extension use case.  These aren’t considered in [3] but do reinforce the above conclusion, which is based on [3], as shown in the following table.

Thus, the extension use case turns out to be an inappropriate choice for modeling nonessential goal-related behavior; in contrast, the option flow is ideal for this.

Benefits of using the option flow

Ease of producing use case models:

Ease of consuming use case models:

It is my hope that this article will contribute to crisp, clear and consistent use case models (including diagrams and specifications), and will benefit their producers and consumers, as well as the organizational benefit of their employers.