Waterfall vs. Agile: A Relative Comparison

Written by Anna Rajander on August 5, 2021. Posted in Articles.

The merits of Agile versus Waterfall are well documented. However, it is useful to understand the relative differences between the paradigms and how they impact Business Analysis – particularly if you work in an environment where both approaches are used.

This article attempts to provide a visual, relative comparison between:

The approaches are compared across three areas that matter to many Business Analysts:

The timeline for discovering, specifying, and managing requirements differs greatly between the two approaches. A traditional Waterfall approach includes the requirements phase early in the initiative where the focus is on requirements specification and management activities. At the end of this phase, the ability to change requirements is limited. Therefore, most of the effort to elicit and manage requirements happens during this early phase.

By comparison, requirements elicitation and management activities for an Agile initiative are more evenly distributed over the life of the initiative as requirements are constantly reviewed, updated, and prioritized.

The relative requirement management effort over time for each approach is shown in Figure 1. 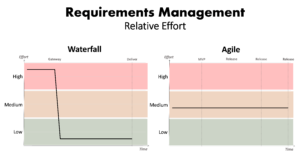 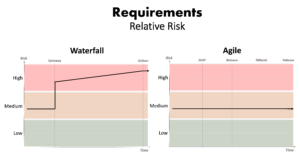 For a traditional Waterfall approach, all the effort to elicit and document requirements happens at the beginning of an initiative with limited mechanisms in place to revise or revisit requirements in later stages – regardless of what new information may come to light. This means that it is comparatively more likely (i.e. higher likelihood) that there will be ill-defined requirements. The likelihood of having ill-defined requirements is fairly consistent throughout the initiative as it is the result of a constraint imposed by the methodology.

In contrast, the impact of ill-defined requirements is low for Waterfall approaches during the initial requirements phase of the project as this is when there are mechanisms in place to actively review and change requirements. After this point, the impact of ill-defined requirements can increase quite dramatically (particularly for initiatives that involve the procurement of resources and/or base products as per the requirements as part of the next phase) and continues to increase throughout the life of the initiative. This is because the cost of changing products increases as the initiative progresses through the design, implement and verify phases.  This is demonstrated in Figure 3. 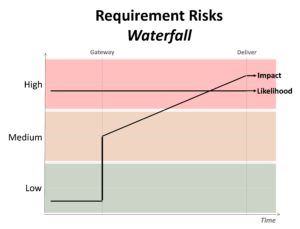 Figure 3 – Waterfall: Likelihood and impact of ill-defined requirements over time 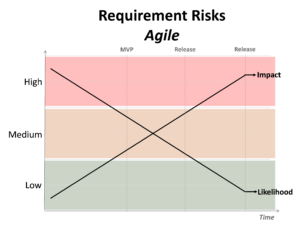 Figure 4 – Agile: Likelihood and impact of ill-defined requirements over time

By the end, the impact of ill-defined requirements on comparable initiatives is relatively similar for both Waterfall and Agile methods – it is the likelihood that contributes to the overall difference in relative risk.

Another key point of difference between Waterfall and Agile methods is when benefits are realized. For Waterfall initiatives, benefits cannot be realized until after its core products are fully delivered. There is limited opportunity for early benefits realization in traditional Waterfall initiatives. By comparison, Agile methods offer opportunities to realize early benefits with the incremental delivery of products, as demonstrated in Figure 5. 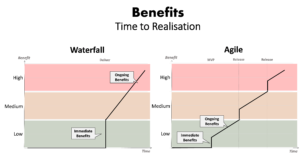 Figure 5 – Waterfall vs. Agile: Relative time to the realization of benefits

Why does it matter?

This article has provided a relative comparison between Waterfall and Agile across three areas. In comparing Waterfall and Agile paradigms in relative terms this article does not seek to promote one over the other – both have their place. In addition, this analysis has not accounted for all the available variations, flavours, and mashups of approaches. However, understanding the relative differences between the basic paradigms can assist when preparing and planning to work with a specific methodology – particularly in environments where analysts may be expected to work with multiple different approaches.

Anna Rajander is a Certified Business Analyst Professional with almost 20 years’ experience in both business analyst and project management roles.