Written by Christina Lovelock on August 28, 2019. Posted in Articles.

‘Individuals and interactions over processes and tools’.

To really live by this statement, we need to monitor our own behaviours, seek to improve our relationships with others and our interpersonal skills. But how much time do we spend analysing and reflecting on our own behaviour?
There are some common behaviour traps that Business Analysts can fall into, that we all need to be aware of. 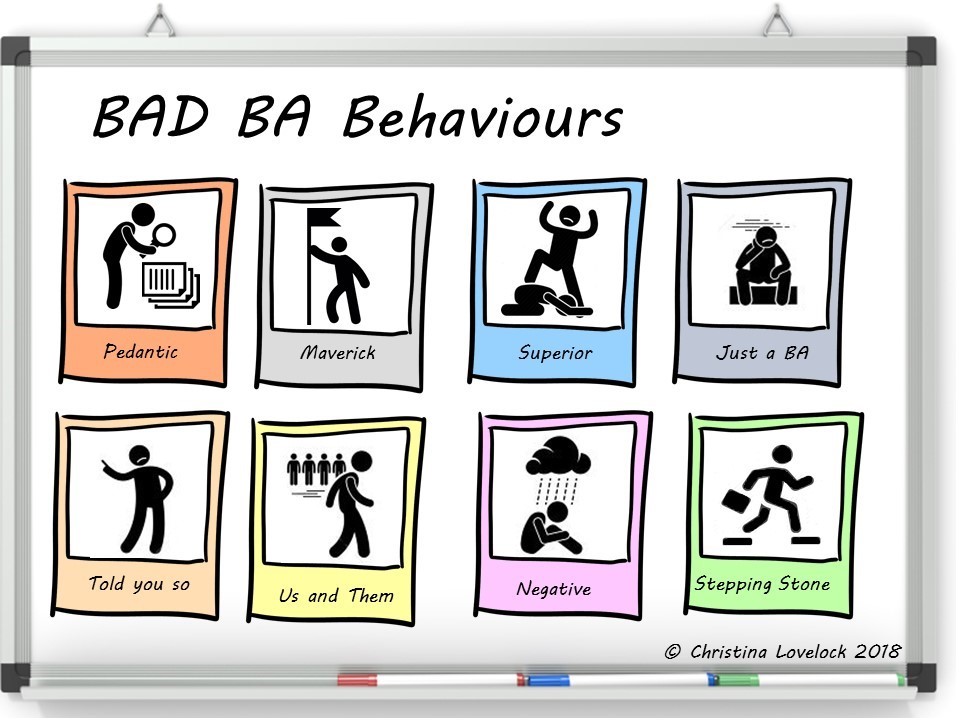 We all know that as BAs we can be pedantic. In the past we may have even celebrated this behaviour, but if we are seen to be taking enjoyment from the fact that other people have made mistakes, it’s not helpful and people will avoid involving us.

Being given the opportunity to contribute to something is really important. As BAs we need to cultivate a culture where people want to discuss things with us, they want to share early drafts of their work, they trust us to encourage them and collaborate with them and not pick holes in their work.

Some BAs will resist any attempt to constrain and standardise business analysis. They won’t use templates, they are vague about the BA deliverables the are producing, they won’t share things for peer review and are not interested in the development of the BA practice.

Despite this, maverick BAs are often well regarded by their project team. They are seen as helpful and flexible and the project doesn’t care too much about use of BA templates and development of standards!

Maverick BAs really damage the profession as they are not promoting a consistent view of what the BA role is about. They do what they want, however they want to do it.

We need to put aside our maverick tendencies, and believe that by contributing to the development of the profession, we will elevate the standard of business analysis in our organisations.

Sometimes we regard other project roles with contempt, (“The PM is an idiot”; “Users don’t know what they want”; “The developers don’t listen”….) and sometimes BAs make no effort to conceal this contempt! These situations provide a good opportunity to practice our empathy skills:

Why don’t users know what they want? They have probably never had the luxury of stepping outside their day jobs to really think about it.

Why does it appear that Devs don’t listen? They are often pressed for time and have to make assumptions based on their knowledge and previous experience.

Why do project managers seem like idiots? They are juggling 100 priorities and it’s not their job to know the detail like we do.

The BA role is incredibly useful, but we are part of team, and if the team fails we all fail, however good our individual contribution.

Many BAs feel that their culture of their organisation means the BA role is not valued, and they feel like the bottom of the pile. If well tell ourselves we are bottom of the pile, and tell our colleagues we are “just BAs” we have a long road of dissatisfaction ahead of us.

It is true that many people do not have a clear understanding of what a BA does, but that’s something we need to tackle on every project, with every stakeholder. Understanding of the BA role is not going to happen by osmosis we need to make it happen.

We need to feel proud of the role we have and work we do – but just no so proud that we accidentally become superior!

I told you so

We can appear to use the project risk register as the “I told you so log”.

This sometimes comes from feeling genuinely frustrated, that if we had been listed to this problem could have been avoided. This is our way of trying to remind people that we had a good idea, or useful insight that was ignored at the time and it could have helped.

But “I told you so” never helps situations and it definitely doesn’t help relationships. We need to work on our influencing skills, and acknowledge that ‘bombard with detail’ is not the only way to influence.

There are lots of divisions that can arise, between BAs and project managers, between project staff and our business colleagues, between our organisation and the supplier.

It is really easy to hide behind these real or perceived boundaries, and generalise everyone on the other side of the divide. As BAs we have a responsibility to avoid silos, encourage collaborative working and be the people who are willing to work across boundaries.

We can be seen as very negative. Some BAs want to say no to everything, and as it is our JOB to analyse things, we can usually come up with five good reasons something won’t work before the other person has even finished explaining the idea.

A simple swap of “yes, but…” to “yes, and..” attempts to build on an idea and help people think their way out of problems rather than list off all the flaws in the idea.

There is a small subset of people who are using analysis as a stepping stone in their career, and they are often not too subtle about it!

Business Analysis may not be a long term career for everyone, and some organisation structures don’t support the idea of progressing your career as a BA; but while you are a member of this profession, be in it, be committed, be the best BA you can be.

These Bad BA behaviours were discussed at the BA Conference Europe 2018. Over 100 BAs from all over the world considered these behaviours. The behaviours were recognised, both in ourselves and our BA colleagues. 78% said they had seen BAs being negative, and this was also identified as the worst of the bad behaviours that BAs regularly display.

If we want others to see value in the BA role, and increase our level of influence, we need to break out of our bad behaviours. We can start by noticing our behaviours and by being positive, being hopeful and (trying) to always look on the bright side.

Christina is an experienced BA leader, has built BA teams ranging in size from 5 to 120 Business Analysts and champions entry level BA roles. She is active in the BA professional community, attending and regularly speaking at events. Christina is an examiner for the International Diploma in Business Analysis and is also a director of the UK BA Manager Forum. She has co-authored the 2019 book, Delivering Business Analysis: The BA Service Handbook, which shares insights and findings from research into Business Analysis, practical guidance for BA leaders, and case studies from across the professional community. https://www.linkedin.com/in/christina-lovelock