Career Sabotage; Negative Influence from a Past Employer

Written by Heidi Allison on May 4, 2010. Posted in Articles. 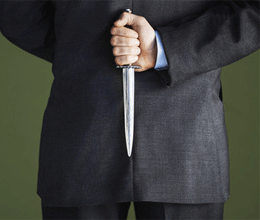 The word was out on Sam Edwards. Someone was telling prospective new employers that they shouldn’t hire him. This single “bad reference” cost Sam at least seven job offers and forced him to tap into more than $50,000 of his retirement fund. This is in spite of his solid credentials.

Edwards (not his real name) has since found work, but two years later he is still angry with a former boss for nearly ruining his financial life. Sam was able to stop his former boss from spreading more negativity, but he wonders how many other job seekers are not so fortunate.

“For months I suspected that my former boss was saying something about me. The problem was I didn’t know what he was saying or how to prove it,” said Edwards.

However, job seekers like Sam can now turn the tables on their former bosses. Many have begun to check up on former bosses, colleagues and even trusted friends, by using professional reference checking firms to see what those references will say about them to prospective new employers.

When you get right down to it, you don’t know always know for sure who you can trust. There is simply too much at stake – your job, your income, your family’s well being – to leave to chance that your references are positive and accurate.

About half of the references our company investigates offer mediocre to downright negative input – often to the surprise and dismay of the clients. People they believe will give them a good reference, frequently do not. And the likelihood is that such references will continue to “poison the well” unless their negative input can be documented and addressed.

Causing further aggravation, it is not uncommon for references to pass out inaccurate information. Dates and title of employment, the reason for the separation and salary information offered by references are sometimes provided in error, and it is (unfortunately) often assumed by potential employers that the job seeker is being dishonest.

The first step in counteracting such issues is to obtain third-party documentation, and we are always up front with the people we call to check a reference. When we call a reference, we simply state that we are calling to do employment verification and reference check on (name of client). Typically the reference assumes we are considering hiring that individual or we have been hired to check them out for a company that is considering hiring them. Under no circumstances do we ever disclose who has actually hired us to perform the reference check. This allows our client complete confidentiality and the ability to use our information in court should the need arise

Fortunately, there is recourse for those whose reference(s) have been documented as offering negative commentary about them. Cease and desist letters or potential litigation may be appropriate tools in the hands of an employment attorney.

If you suspect that a reference may be sabotaging your chances for employment, the first step is to obtain documentation by a third-party company indicating exactly what they are saying. And, the sooner the better – a negative reference can plague you indefinitely. Identifying such a person and preventing any further damage caused by them will surely be one of the best investments you will ever make.

Heidi Allison is president of Allison & Taylor, Inc. The company and its principals have been in the business of checking references for corporations and individuals since 1984. For further information, please visit http://www.AllisonTaylor.com.