Blind Men and the Elephant

It was six men of Indostan
To learning much inclined,
Who went to see the Elephant
(Though all of them were blind),
That each by observation
Might satisfy his mind …
“The Blind Men and the Elephant” by John Godfrey Saxe (1816–1887)

We all know the parable “The Blind Men and the Elephant,” and the moral behind it. Newly-formed project teams are not unlike the blind men – every member comes in with a different specialty and role, and with it, a different perspective of what needs to be done, in addition to how and what the end result should be. This is especially true in today’s world, with matrix-ed and virtual project teams comprised of people in different continents with desperate cultural backgrounds coming together to form a singular project team

Now, consider a situation that most of us have encountered a time or two. From the time an airplane lands at an airport, to the time it’s turned around for departure, there are a large array of synchronized activities and handoffs. This is the point at which passengers will deplane (“Please take all your belongings when you deplane, please collect your luggage from carousel nine in the D Concourse, please check monitors for connecting flights”) and the ground crew unloads cargo (and makes sure the bags actually show up on carousel nine in the D Concourse), clean up the airplane (“As a courtesy to the cleaning crew and the folks boarding after you, please do not stuff used tissues, newspapers, coffee cups, cans and whatever other garbage you have in the seat pocket in front of you – instead hand it to the flight attendant when she comes to collect”), make sure a fresh pot of coffee is ready for brewing and the soda cans and peanuts (or pretzels) are stacked and locked.

At the ticket counter, crews make sure the new set of passengers are all checked in and ready with the right sized baggage (“No, the third bag is not allowed,” “No, you cannot stuff that oversized bag in the overhead locker,” “No more First Class seats are available for free upgrades,” “Yes, it’s a middle seat … I don’t have a window or an aisle seat to offer you”) to board the plane. Towards the underbelly of the airplane, the cargo handlers are busy, first unloading, and then loading up the correct bags (and sometimes the wrong ones) tagged to make it to the new destination. Somewhere in the middle of this, the plane gets all the mandatory maintenance checks completed and certified for operational readiness to take off again.

All the while, the pilot has his eye on the takeoff window as scheduled with the airport tower for an on-time departure (airlines get fined for late departures, by the way). Like the old fable, every part of the airplane is touched by a different team with a different perspective, but unlike the fable, they do know the big picture and what part they play in it. They have a singular focus – to ensure an on-time departure.

In 1965, Bruce Tuckman published his theory, called “Tuckman’s Stages” based on research he conducted on team dynamics. Tuckman described the first four phases of team formation as: Forming, Storming, Norming, and Performing. He later added a fifth phase called Adjourning. Mapping Tuckman’s concept to the project phases of Initiation, Planning, Execution, Monitoring and Control & Closure, gives a Project Manager the ability to monitor team dynamics, watch for signs of team dysfunction and create the correct atmosphere to ensure team performance.

From the time a new team is formed during Project Initiation and Project Planning phases, through the Project Execution phase to the Project Closure phase, team dynamics change. Let’s consider two groups of factors: 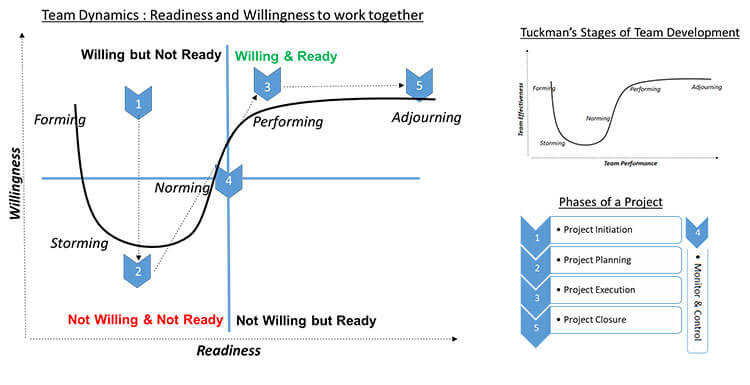 In the Project Initiation phase, all teams are enthusiastic and willingness factors are high, but the readiness factors are not, as the project is still in its inception. This is the Forming phase for the team. Team building starts in earnest in the Project Planning phase with the Storming and Norming phases. As the readiness factors increase with planning, and the team works together, differences arise and willingness factors decrease, till the team establishes a new norm and stabilizes. It is key that Project Managers pay attention to team dynamics at this phase of the project. Some of the common signs of dysfunctions in teams that a PM should watch for and correct in the Project Planning phase include:

Ideally, when exiting out of the Project Planning phase with the right emphasis on team building, the team should be synchronized and playing well together and in the Fourth Quadrant, where they are willing and ready. The PM should actively work to resolve team issues and build trust and confidence among members to get them to – and keep the team in – the Fourth Quadrant through the lifecycle of the project. Along with paying attention to the project budget, schedule, deliverables, quality and other metrics, it’s the PM’s responsibility to actively monitor team dynamics and ensure that the project team is functioning optimally as part of the Monitor and Control phase.

In today’s complex world, no project can be an individual achievement. It takes a well-functioning team(s) to work in tandem to deliver a successful project. And what makes a well-functioning team(s) is its ability to integrate varying perspectives into the singular focus of achieving the project’s goal. Teams build trust by understanding and integrating different perspectives: They work smarter, are more creative and are more flexible. The sooner this integration happens, the smoother project execution is achieved.

Note on Agile Projects: Immaterial of the methodology followed, team dynamics plays a part in the success of every project, be it traditional or agile. Agile projects lend themselves to self-organizing teams where teams decide on the velocity (pace) of execution and delivery. It’s a fallacy to assume that agile teams are well performing of the bat with little or no focus needed on team dynamics. However, agile projects do have a shorter plan to delivery cycles, which help highlight team issues sooner. Agile teams should carve out time for honest self-reflection, and actively find ways to work better and improve on team dynamics as part of the Sprint Retrospectives.