Written by John Vaught on February 7, 2019. Posted in Articles.

You’ve been to a meeting (or twenty) in which the leader tells you that the group is going to brainstorm.

There are rules to storming, of course, which are things such as:

If you find yourself in a meeting like this, you can have some fun by asking quirky questions to appear smart in brainstorming meetings: 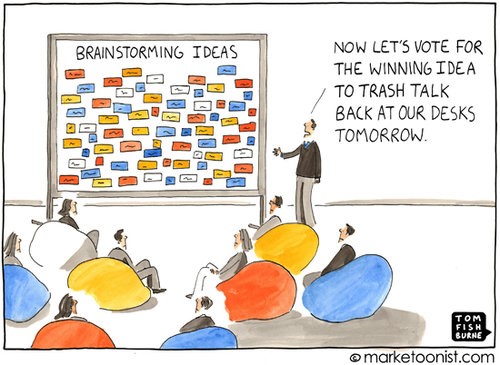 Sure, you’re going to get some looks when people figure out what you are doing, but that’s because this is the best way to get creative ideas on the table. Grab a group, throw out as many ideas as possible without any judgement, and then crazy creativity happens. Right?

Not according to this article, which boldly states that “Brainstorming is Dumb.”

But it turns out that brainstorming is actually a terrible technique—in fact, people generate fewer good ideas when they brainstorm together than when they work alone.

Alex Osborn came up with the “brainstorming” method in the 1940s and it has now become ubiquitous; few people are asking if it actually works. Turns out that it has the opposite effect – you turn out better ideas alone than using this method. Paul Paulus, a professor of psychology at the University of Texas at Arlington, has this to say about why:

You may be thinking – why didn’t someone tell me! Well, they have, since as early as 1958.

If it doesn’t work, for goodness sake people, let’s stop doing it! Let’s get real about creativity – it rarely happens at the drop of a hat or because we throw ten people in a room. Creativity is hard work, and it can take time and deep thought.

So does this really mean that I should ignore everyone else and rely on my inner creative genius? Well, sometimes.

One study found that should do the opposite of the one thing that Osborn thought was the most important – feel free to debate suggestions as they come in. Criticism is often thought of as a creativity killer, when in fact the studies consistently find that debate lifts ideas and brings up more and better alternatives and as well as diverse ideas.

“In a way, the power of dissent is the power of surprise. After hearing someone shout out an errant answer, we work to understand it, which causes us to reassess our initial assumptions and try out new perspectives.”

This also says something about the mix of people that are best at having these kinds of debates. Those who are strangers do not have the comfort to truth, but those who are too comfortable with each other do not push into new areas. Some familiarity mixed with some newness can provide a freshness, if you know what I mean.

One study looked at the results provided from three-person groups performing a complex problem-solving task. Using the Osborn form of brainstorming you would think that the group that collaborated the most had ideas that were more than the sum of their parts. Wrong. That group had the most mediocre results; this shouldn’t be too surprising when you consider that group dynamics will often bring results back to the average. The other result isn’t too surprising either – the groups with no interactions had some of the best results; but they also had some of the worst. Working alone produced results all over the map.

Here’s where you need to pay attention: the group that interacted intermittently had the consistently best results.

The right mix of individual effort, in deep work, with some group interaction will generally produce overall better results. I know that didn’t rock your world. Of course, you are thinking, I just wasted ten minutes of my time to read about something I already do.

But here’s the kicker – you probably aren’t using the right mix. Most of us are using the mixer when we should be cooking, and vice versa, ending up with scrapple on your plate…

Your most creative work is when you are blocked off from other people and can truly concentrate. Your best time to contrast and compare to make the ideas better is when you are collaborating.

The Problem = we are entering a world where it is getting harder and harder to block off interactions, so we are consistently putting ourselves into the group that produces mediocre results.