Things We Can Learn from the Italian Stallion. Part 1.

Written by Kupe Kupersmith on April 27, 2010. Posted in Articles. 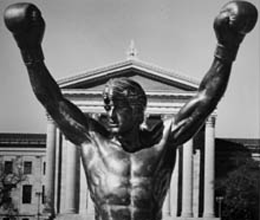 OK, I’m coming clean.  My all time favorite movies are from the Rocky saga or “hexology”; Rocky, Rocky II, Rocky III, Rocky IV, Rocky V, and Rocky Balboa (number VI).  Every now and then I watch one of the movies and never get tired of the scenes of Rocky training or battling the next opponent in the ring.  But, there is more to the Rocky movies than just boxing.  There are lessons we can all learn from Rocky Balboa. I decided to dedicate this blog post to the greatest boxer to ever live! Let’s see what we can learn from the first two Rocky Movies.

As part of our personal and career development we should all find mentors and be a mentor for someone else.  There are many benefits to being a mentor including working on your listening and leadership skills.  Being a mentee will allow you to learn valuable lessons from someone who has priceless experience and has already been where you are at this point in your career.

Throughout the Rocky movie, the concept of mentorship kept popping out to me.  There is a scene where a young girl, Little Marie, from Rocky’s neighborhood is hanging out with some older boys on the street corner. Rocky pulls her away and walks her home.  During the walk home he is trying to give her advice about life and how the people she associates with will influence who she is as she grows up.  As Little Marie is walking into her house she turns and says to Rocky, “Screw you creepo”. As Rocky walks away he mumbles, “Yeah, who am I to give advice.”  Don’t think you can’t be a mentor. You have experiences that can help others.  Little Marie ends up thanking him later.

Later in the movie after Rocky decides to fight Apollo Creed he does not accept help from anyone to help train and prepare for the fight.  Finally he comes around and gets Mickey to be his trainer and even gets Paulie, his future brother-in-law, involved.  In the end he is prepared for battle.  We all need mentors, we can all learn from others that have experienced things we have not.  Do not be ashamed to have a mentor.  You do not have to do this alone.

As BA professionals you can find mentors and mentees within your family, company, or organizations like the IIBA.  Also, check out this site for mentoring tips, http://www.mentoringgroup.com/.

In case you are not as familiar with the Rocky movies as I am, here is a little recap of what happens at the end of Rocky.  Rocky goes 15 rounds with Apollo Creed.  Rocky’s right eye is badly damaged and the peripheral vision in that eye is all but gone.  At the end of the fight both Rocky and Apollo say there will not be a rematch.

Now on to Rocky II where we learn some important lessons about checking our egos at the door and never saying never.

Since Apollo was supposed to finish off Rocky in three rounds in their first fight, Apollo was getting abused in the media and received a ton of hate mail,  basically calling him a joke, washed up, etc.  Apollo then started calling for a rematch with Rocky.  Even though his trainers, managers, and family all thought it was a bad idea he kept pressing for a rematch.  He wanted this rematch because of his ego not because it was the right thing to do.

As BAs we need to leave our egos at the door when working on projects.  The project is not about us.  Our goal is to do what is right for the project.  If your mindset is focused on the project needs, the project will be a success and you will get recognition.  Remember, it is not what the project can do for you, but what you can do for the project!

“There ain’t no can’ts” is such a great line from the great manager Mickey Goldmill.  Apollo pushed and pushed until Rocky and Mick finally agreed to the rematch.  The problem was that Rocky’s eye was so bad that he could not fight as a Southpaw (left handed).  Since his peripheral vision was so poor he would never see punches coming from Apollo until they were right on his face if he fought left-handed.  So Mick was pushing Rocky to become a right-handed fighter.  After a number of times with Rocky saying “I can’t do it Mick.” Mick yells back “there ain’t no can’ts.”

Every situation we encounter as BAs is slightly different.  The project characteristics are different; the people we work with are different.  We cannot use the same techniques on every project we work on.  Always try to learn new techniques and skills and try them at the appropriate times on projects. If you don’t adapt the “punch” you may not see is a great opportunity. Never say “I can’t do it, Mick.”

In future posts I’ll discuss lessons learned from the last four movies of the saga.  Oh darn, I guess I’ll have to watch the movies again!!