What your burndown charts are telling you

Written by Nick Stowers on April 2, 2020. Posted in Articles.

When I was introduced to scrum, the burndown chart was a tool that was highly emphasised however I feel the purpose has changed

from it being a tool to predict (to a certain level) timescales for delivery to a tool that measures a team’s productivity…..in other words, the focus is on the number of points cleared which in my eyes, drives some adverse behaviours.

In this blog, I’d like to show some example burndown charts I’ve come across in teams I’ve been part of as a Business Analyst and what they should be telling you about how the team is operating. I’ll also offer some suggestions to fix what could be barriers to becoming that high performing agile team we strive to be.

So what is the purpose of a burndown chart?

A couple of quotes:

‘Burn down charts are a run chart of outstanding work. It is useful for predicting when all of the work will be completed’- Wikipedia, 2019 <“>https://www.mountaingoatsoftware.com/agile/scrum/scrum-tools/release-burndown>

We can take it from both of these quotes that the purpose of the burndown chart is to be able to visually see progress through a sprint, however I’d like to emphasise Mike’s point in his description that it ‘is a way to clearly see what is happening…during each sprint’. On many of the teams I’ve worked on, if not most, burndown charts are not reviewed at all but only looked at if someone outside the team wants to see them.

I’m well aware every burndown chart will have its own unique story behind it so when I give what I think are reasons behind the chart in the examples below, I’m only hypothesising from my own experiences. And while the burndown doesn’t tell the whole story, in my experience the analysing of them (with the whole team of course) has always improved the ways of working and that is the purpose of this blog.

Note: in the examples below, each sprint is 2 weeks long with the grey line depicting expected burndown with the red line the actual.

Ok, it’s not exactly like wonderful Manhattan but you get the idea (up and down peaks across the sprint). I think the two key parts of this burndown are the long flatlines at the beginning and midway through the sprint and the spike 3 days in. While this doesn’t affect the sprint points (what points/stories have been added have then been removed), it suggests the team weren’t confident of completing what was going in to the sprint for a significant increase (30 points). Or possibly, the stories weren’t ‘ready’ for the sprint. Also, have the team bitten off more than they can chew during sprint planning as there are 10-20 points left on the table at the end of the sprint?

During sprint planning, ensure all the stories that are sprint candidates have met the team’s ‘Definition of ready’ and the team are confident that those stories that are being taken can be completed within the sprint. This may take some time for the team to get to this point as estimation and sprint planning (for me) are the two areas of Scrum that take most time before the team are comfortable with both aspects. And in my experience, if the team get these elements right (well estimated stories and confident planning), sprints tend to go pretty much as planned. 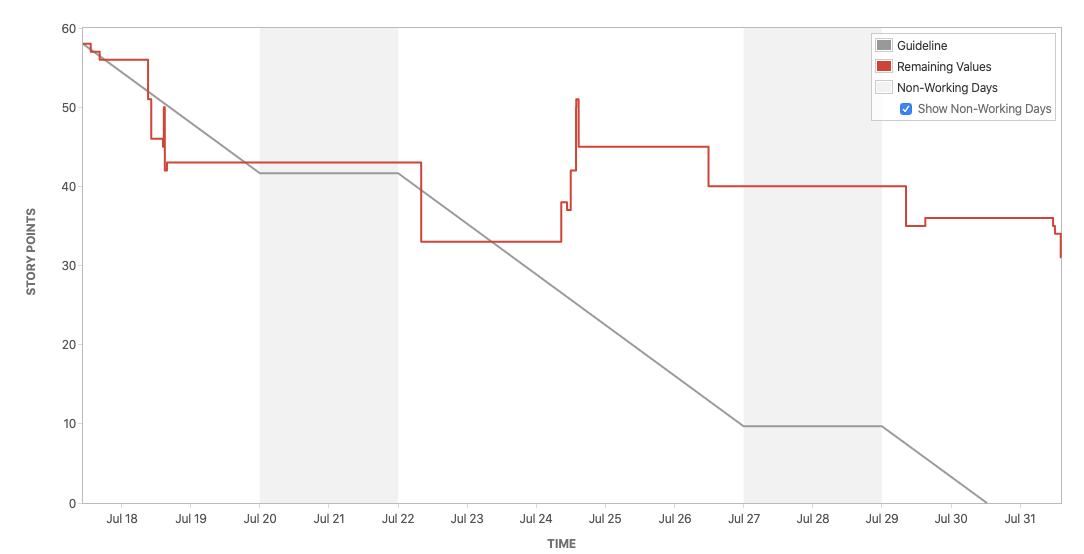 I think it’s fair to assume this team is clearly having problems as you can plainly see but what might be the potential cause of this erratic burndown (or burn across!!)? Firstly, it’s clear the team have taken on way too many points for the sprint. Of course, there could have been an issue near the end of the sprint that caused the team to stop developing but even so, to fall short by 30+ points should be saying something. Long flatline periods suggests stories weren’t small enough to deliver incrementally. Large increases in points mid-sprint suggests the team have not been disciplined enough in saying ‘no’ to new stories being added. If these stories had not been added (20+ points), then the team may have achieved its target.

Don’t be fixated by how many points can be done in a sprint. Just because the team did 60 points in the previous sprint, don’t assume the team can do it again the following sprint. I’m a big fan of Mike Cohn’s ‘Capacity-driven planning’ and I feel it’s the team’s responsibility to confidently be able to say, ‘yes, we can commit to everything in this sprint’. In velocity-driven sprint planning, I tend to see the thought process of what was achieved last sprint and therefore what stories can we cram in to achieve the same number of points or more. I think this approach is counter-productive and brings wariness to the team’s ability to confidently commit to the sprint. Therefore, ask the question, ‘what can we confidently achieve in this sprint?’ as opposed to ‘how many points should we do in this sprint?’ 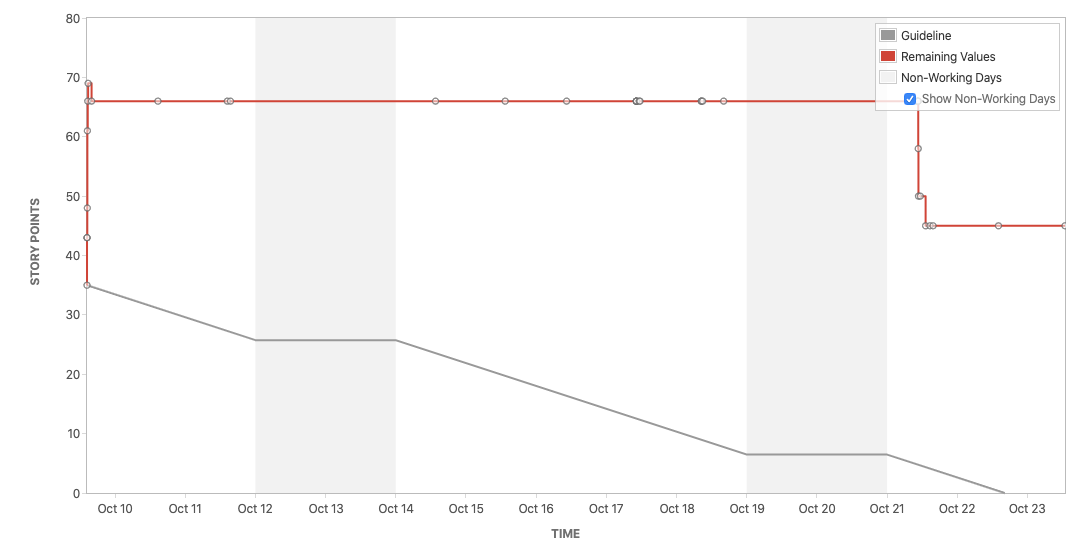 My first thoughts on seeing this burndown was, ’should you even be using agile as a framework for delivering your project?’. I think you’ll agree that from day 1 of the sprint, 35 points have been added before work’s even started. Then there are no points (or virtually no points) cleared for 8 days before a big drop of 20 points and with still 40+ points left on the table. It could be this team is very early in its agile journey and therefore are unclear on their velocity (hence so many points) but still, loading up a sprint with no idea as to velocity suggests immaturity of an Agile delivery framework.

In my view, the type of work being carried out by the team might suggest they’re unable to deliver iteratively and therefore may be better suited to a Kanban than a sprint approach. It could be they require the use of an Agile coach or Scrum Master for a period of time to set them on the right track and start from a position where they can clear what stories they take in to sprint and build up their velocity.

I hope those reading this are familiar with these types of burndown charts or if you’re new to Agile and you’re utilising burndowns, my point here is to make sure you use them to analyse how the team is performing and how that performance can be improved. Of course, your retrospectives are the perfect forum to do this.

I should make a couple of points though. Firstly, don’t look at a burndown chart in isolation. I’d look at the last 3-5 to see if there are patterns emerging before you embark on working to improve. Do they look the same or do they look completely different over a period of sprints?

Secondly, don’t place too much emphasis on them. You might think that’s odd as that’s what this blog is about however, as I mentioned, each sprint is unique and each burndown will have some sort of story behind it so use them as a discussion point for the team to improve, and not the be-all and end-all to improve the team’s performance.

As a Business Analyst, I nearly always find the reason why teams don’t deliver in small increments during a sprint, and therefore creating the burndown chart examples in this blog, is down to the user stories. No that user stories are the be all and end all but invariably I find it comes down to the stories either not following the INVEST model or them not being ‘ready’ for the sprint. If you get this part right then your sprints should run smoother and your burndown chart will reflect that.

So don’t ignore your burndowns (or burnups if that’s your preferred method), and if the team’s struggling to complete its sprints, spend some time analysing them to see where the team can improve.