Written by Andrea Brockmeier on October 30, 2012. Posted in Articles. 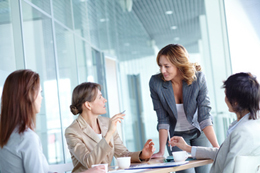 The Quiet.  The Unknown. The Courageous

The ability to influence others is a requisite skill for any project professional.  It sure would be handy to be able to march around and dictate that people do this or that, but the fact is, when team members tell us “You’re not the boss of me,” more often than not, they’re right.

Unfortunately, influencing is one of those soft skills that doesn’t come naturally or easily for many of us.

In their new book, The Influencing Formula: How to Become a Trusted Advisor and Influence Without Authority, authors Elizabeth Larson and Richard Larson describe a “formula” for how to influence:

They explain how influencing requires developing relationships in order to build trust, preparing to interact with others to change their thoughts, actions or feelings, and courage to try to influence others when they may not agree with you.

This certainly speaks to business analysts and project managers.  We need things from people who often don’t report to us, or may be superior to us, or may not see our projects as worthy of support. Considerable time is spent dissecting and defining these elements.  Of the three, it’s the courage piece that leads to the most challenging discussions with students.

As noted in their book, the Larsons observe that courage has always been a dominant theme in literature and movies, from the Cowardly Lion in The Wizard of Oz, to the Gryffindors in the Harry Potter series.  Putting oneself in harm’s way to do what is right is an act we admire and see as courageous.

As they go on to explain, courage doesn’t necessarily involve the possibility of physical danger.  In the classic To Kill a Mockingbird, Atticus Finch demonstrates moral courage in his opposition to racism in the American South in the 1930s.  Note the Larsons, “Seen through the eyes of his young daughter, Scout, Finch shows courage throughout the novel: ‘I wanted you to see what real courage is, instead of getting the idea that courage is a man with a gun in his hand.  It’s when you know you’re licked before you begin, but you begin anyway and see it through no matter what.’”

When discussing what courage means in class, these types of examples come up and all coalesce into a generally agreed upon definition: The ability to face danger even when afraid in order to do what’s right.

It’s the “what is right” piece where I get stuck.  As my very savvy students are quick to point out, what’s right to me may not be right to you.  We get into this ultra-relativistic place where anyone who takes a risk for what they believe is right can be considered courageous.

Who, then, are the examples of courage?  MLK?  JFK?  A military official who leads others into battle to win a war against tyranny? A candidate for political office who takes an unpopular stand on an issue about which they are passionate?  A project manager who makes a tough call on scope change knowing it may alienate a key stakeholder?

To be sure, courage is the willingness to face danger or risk.  But what did any of those examples expect to gain?  Fame?  Fortune?  Wealth?  A promotion?  Does it matter?

I think it does.

Courage needs to be defined both by what one has to lose as well as by what one expects to gain.  Yes, courage involves facing risks to do what is believed to be right, but it also includes doing so when the only thing that’s certain to be gained is the ability to look at yourself in the mirror when it’s over and say “I did the right thing.”

To do something utterly brave and take huge risks when the likely outcome will bring fame, wealth, or prestige may take a lot of guts, but not courage.  It makes someone a risk-taker, but not courageous.

So who are the truly courageous?  Does this definition make the list unreasonably short?

The list is plenty long, but it includes fewer names that are familiar and many more that will never be mentioned by those who didn’t know them or written in the pages of any book. Most of the truly courageous are the people who take risks, go out on a limb, and say what others are afraid to say without an audience, stage, or crowd to cheer them on or watch with anticipation to see how things turn out.

This is not to say that good fortune may not land on their doorstep after a courageous act.  Indeed, they may be celebrated, admired, or emulated.  They may inspire parades in the streets  and holidays may be named in their honor.

But the greatest act of courage is one in which the only anticipated reward before going into battle, conflict, or danger is the satisfaction of knowing that what you are doing is right.

So the next time I find myself soliciting a list of examples of courage and it seems that every risk-taker or person who ever put themselves in harm’s way for what they perceived as right makes the list, I will apply a two-part litmus test: What did they have to lose, and what did they expect to gain?  I suspect that will cull the list considerably.

Don’t forget to leave comments below.